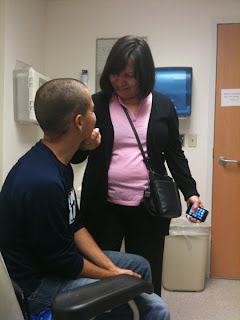 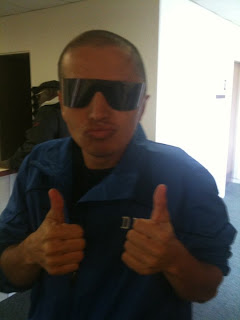 8 days after I got out of the hospital, I had to go back for a follow up. Sleeping had been incredibly difficult for the last week with me not able to do more than an hour to two at a time. Part of the problem was likely the steroids and medication but I imagine another part was the fact that for the first time I could remember I was having to sleep on my back where I usually slept on the side where my swollen head was (was this the cause of brain cancer?). I had to take a nap everyday and that Friday was the first time I had used an alarm clock in weeks (I don’t usually use an alarm clock in regular life) and was getting up at 6:30 for an 8:00 Am appointment. The night before, I had not been able to fall asleep until almost two am due to the anxiety of the next day.

There I had sat wondering whether it was going to be the 2, 3 or 5 week scenario. They had also told me they would be doing some test work on what they removed. In the best case scenario they hoped for, the cells would come back as 3 to 5% actively cancerous they had stated before. But in the follow, they told me in my case, it was 0%. These Duke doctors, which had been the most optimistic out of all that I had talked to, had hoped they were buying me 10 years. The simple truth was that this surgery was simply supposed to be just an extension of my death sentence but now they stated that they thought it was unlikely that I was going to die of this. I was not going to have to come back for 5 months because that’s about how long before the “hole” in my brain would refill. I’d have to do MRI’s as a monitoring tool forever to check if it came back and do anti-seizure medication twice a day but a minor daily change and a tri-annual check was, in the scheme of things, fairly minor. It would be pointed out that the monitoring starting point after the surgery was where they hoped most patients with my diagnosis were a few years after not immediately. My mother immediately broke into tears and loudly praised God for his miracles. Alex who was taking notes for my wife as to what I needed to be doing and the diagnosis stopped writing because he didn’t expect news anywhere near this good. I called my wife and she very casually stated that was what she expected, I was so low on energy that I didn’t quite catch why this would be so as no doctor had stated they thought this was possible much less likely and she herself had said to a friend that even if this went well, it was going to be tough to live with the concept of an expiration date in mind.

Unfortunately, the medical appointments weren’t over. My eye was looking really red and instead of getting to go home after these appointments at noon as I’d hoped, they set up an appointment for the afternoon to check some things about my vision. After a variety of tests, they determined that my eye was just scratched. One of the tests left me so near/far sighted (not sure which is the correct term) that I could only see things clearly that were like 40 yards away.

Since this was my first time back at Duke since the surgery, we went shopping. I had hoped to be able to find a shot glass, t-shirt or something that said March Madness Duke ’11 but the tournament was still two weeks away even if I was already ending my personal March Madness. Plus, I needed an active way of cheering for them during the tournament. I still bought a few things in addition to some of the ones my mother and brother had gotten me to remind me of this point, some touchstones to never take these opportunities for granted, to help me recall that I’d gotten an incredible opportunity.
Posted by Mexican Vanilla at 4:31 AM No comments: 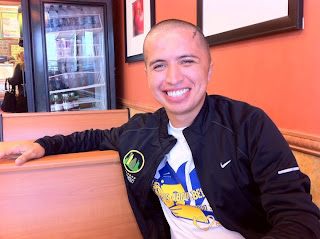 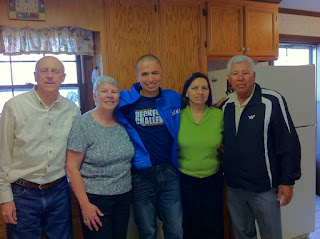 My wife being gone was hard and I tried to call her every chance I got. Luckily there was some secondary support, the people I was being hosted with were awfully kind and typically were the ones taking my blood pressure and pulse and making sure I ate. Also several friends from the area or not too far came by and shared their kindness.

The best man from my wedding, Gil, drove 7 hours in spent a couple of hours with me and drove home as it was the only day he could spare. A friend who lived 3 hours away, Linda spent a couple of day. I got to spend time with friends who lived right there in the city. My little brother and mother were there on a daily basis. My friend Alex would spend the second half of the week with me. With almost all of them, I’d want to have our conversations on the road while we were walking rather than just sitting around somewhere. My energy levels were still off because I was still sleeping only in very short intervals but I still wanted to be doing something physical despite the fact I couldn’t run, lift weights or play any sports so I just went walking. By day 4 or 5, I was going on 2 or 3 two to three mile walks. The conversations varied depending on who I was walking with. I’d be thankful for the company and would say that but apparently was also very repetitive. I would have the same conversation two or three times within the same walk and people would just kindly put up with it. Likewise, I would blank out on 10-12 basic words a day, each day a few more but it was a weird phenomenon where I could clearly see the item in my mind but I couldn’t come up with the word for it in any language. Words like insulation where I could see an attic full of white stuff and could state that and say the stuff that is in there that keeps your house warm or cool. Eventually rather than having people tell me the word I’d ask them for hints though for some reason I’d still miss it most of the time. The doctors had warned me about this, that some gaps would be there between the neurons and that the smart thing would be to explain it to people and have them tell you what it was rather than hiding it.

Also took a clear appreciation to people with unique names like Gil because anyone who had a common name like Joe or Jerry whenever I would think of their name, everyone who I knew by that name would come to mind immediately. It was strange because I was putting no conscious effort into it but when their name floated, a dozen or so would come into the screen of my mind. Joe Paniagua, Joe Chavez, Joe Stanley when I was talking to Joe Jones. Staying with a Jim made that particular quality interesting. However, luckily, I didn’t know any other Kianas.

I also started calling various people within a day or two of getting ‘home.’ For whenever first time I would make phone, I had actually written a list of people who had put in time and effort into being very kind and helpful through this whole process. But soon I started calling a much longer list of people and while I haven’t checked my cell phone bill to see how much I did it, clearly my memory was still off because a couple of people have called and said I called them a day or two apart and essentially had the same conversation.

During the walk and talks was when my mind felt clearest. I would talk about some highly emotional things like hoping I was going to get my job back. I talked to my little brother David about the fact that while the surgery had gone well to remember that this was just buying me time and that I was likely still going to be dead within 10 years. I had tried to have this conversation with my mother but it had gone too awkward and David stated he would have it and make sure she was aware.

My wife called rarely and briefly but still every day and said that she was sorry for not being in more contact. She stated getting back to work was stressful and distracting. I even mentioned to my host that while I wasn’t glad she was stressed, I was glad that the source of stress wasn’t me. I told her I’d help with anything now of when I got back and that I couldn’t wait until the walks and talks were with her.
Posted by Mexican Vanilla at 1:34 PM 1 comment: