"Sometimes finding you Is just like trying to smell the color 9"
Remember, remember the 5th of November. 9 years ago almost to the minute I was having a grand mal seizure in the middle of a coworkers birthday lunch. And so the brain cancer journey, in its official capacity would begin. A cancerversary is like a birthday, what we celebrate is our delivery when we'd been developing before that but conception is a harder thing to nail down for most. I'd compared getting cancer to being born before and it still feels apt, oddly enough for a guy who never celebrates his birthday 8/8/80 but loves the number also never celebrates it but not one November 5th has gone without acknowledgement.

Everyone of them has gotten a blog entry. Last year it was a big party at my house, an above average party because I'd beaten the median survival rate of 7 years and got to my favorite number, 8 years. This year the effort of today is not as much of a celebration but as an acknowledgement. Everything that I had some say in today, everything I dream up was quieter than usual. I am hoping to play ultimate, the sport I rarely do anymore but just as pick up. I'm having lunch with people who have been there all along, some of the first to show up at the hospital. I'm actually getting very little time with Kiana unfortunately due to her being on the longest day field trip of her academic career but even when I got that notice, it kind of felt 'appropriate' as the day this all started I barely got to see her because I was trying to 'protect' her from the hospital. I am having a basic dinner where the company is more important than the meal. And I'm getting a run in. In some of that there will be some tension but that's the crux of cancer isn't it? Some of your bodies cell not doing what they are supposed to, trying to hill its host and isn't some of the body fighting against that and somewhere we put together medicine and hope and will power daring to dream that the right balance of the universe plays out?

9 is an odd number. We don't ever quite make it a big deal as multiples of 5. 8 is my number, 7 is often referred to as the perfect number. Still once I got someone a card about how they were a 9 in my book, they took the compliment as serious because it acknowledged that imperfections are acceptable but that it was better than even my own claimed number. 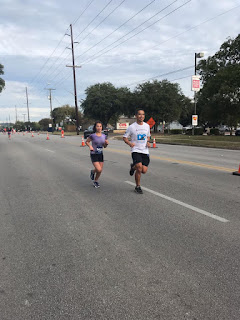 The reference at the beginning of this is a song which captures well how I feel. While it's someone talking about how they try to relate to God is trying to smell the color 9 , they realize that 9 is not a color and even if it were you can't smell a color. It would be incredibly dishonest, perhaps delusional to not talk about that there's rarely a day and certainly no November 5th where I make peace on that I'm one of the fortunate ones. I don't understand it. I've watched someone who beat me in a short race die so it's not the speed. I've seen someone who runs Boston every year have to go back to Duke because it grew back and they have to do more check ups so its not the long distance running. I've seen someone who makes any positivity or hope I have look dim compared to the light they shine who is having to go to Europe for experimental treatments because they aren't approve here. I've seen children pass away from this much less people who adore their children. I appreciate the kind thoughts that friends share of why the universe has been this kind to let me stay alive. I get annoyed at the platitudes from strangers about it. Ultimately I feel confused thankful and guilty when I acknowledge that I'm still here.

In the last few days before this I ran 3 races in 8 days. I won two of them, the other one I was running with Kiana where she Pr'ed but I can't decide what my favorite part of that was. Was it her holding speed or the fact that despite having a head cold and not sounding well she didn't want to slow down? She would trip about mile 8 and get up and run with tears. And for the first (and maybe I hope last) throw up shortly after crossing the finish line. I said with as much conviction as I could muster... sometimes that's supposed to happen but the pictures showed what I loved, that we somehow run perfectly in stride. I see her stubborn competitive pride get her places on runs. I also see it get her in trouble at school and with me. I don't try to change it, just channel it because maybe it's part of the reason I'm still alive. 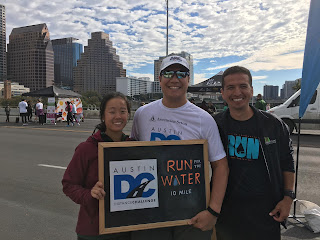 At that same race, I got to cheer on participants as they finished in as they were participants in our distance challenge which is exactly what it sounds like, a challenge to go the Distance. Elaine is one of the participants as are a few dozen friends and a few hundred strangers. The only win for most of us (and I am doing it this year because Kiana is) is just completion, knowing we held on for a commitment. It's a few months and 5 races but you have to be there and finish. The lines aren't quite as clear with cancer but the methodology rhymes.

I'd attend a day of the dead fundraiser concert a couple of days ago. I got my face painted. In display of my manliness, I was the only adult male who got his face painted. Everyone else was children or women. The artist asked me what I wanted and I said I trusted her. She asked for my favorite color and then went with it, asking if I wanted a full face paint or just a half which she described as more traditional. Again, I repeated I trusted her and she went with more traditional. She would add a spider after having it confirmed that I wasn't afraid of them. When I saw the picture afterwards as November 5th grew nearer and I struggled with how much to embrace and how much to let go, I wondered if this was what I was 9 years later, half gone, half living. The tumor, diffuse astrocytoma, has often been described as like a spider with no clear idea of how many legs it has that sometimes grow or become independent tumors of their own. It was tempting to sleep in it even but you know it stains the sheets and one should leave staining the sheets for nights of sex, drugs and rock n roll not just made up stuff. I washed that off even if I can't cleanse all of the tumor, I am glad it's disrupting my life right now less than it has in times past whether or hat's not the case in the future. Someone asked me if I think I'm winning. Well, I think it's past the 9th inning now, so let's just go with that I won but all competitions, games, life have to end at some point. And no one will ever be able to make the case that I didn't enjoy it, share it, and try to contribute while it lasted. 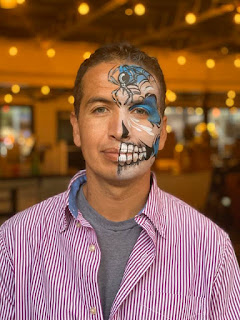 I can't believe I'm still standing. Then again, I haven't been standing still. I've been running, living, loving. I won't deny all the ways cancer disrupted the course of my life but I'm competitive so I've tried to disrupt its course. It all started a long time ago and being a guy with a damaged memory, I don't remember it all. Nevertheless, I am absolutely thankful that the story is not over.