The Backcountry With No Backspace

I've not been back long and my damaged brain knows it isn't adequate to describe from where I just returned. Was it an adventure, an escapade, a feat? A few months ago, I had the privilege of signing up for a program called True North Treks, the particular one I'd signed up for was for a week long trip of backpacking in the Wind River Mountains in Wyoming.

The trip started with us arriving, one or two at a time from places from opposite coasts and many places in between to Jackson Hole, Wyoming. As we sat in an airport lobby explaining motivations from remarks about being directed there by a therapist to just a desire to go the wild, the only common thread was that we were young adult cancer survivors (23-39 years old, yes I know I'm pushing it). 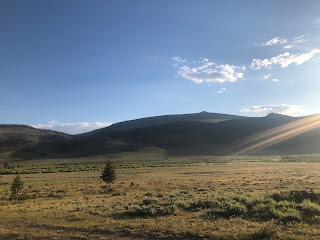 From there until the end, unimaginably, unbelievably, all it did was get better. The drive alone from Jackson Hole to the Wind River mountains had a change of scenery where someone said that felt like driving through a variety of states because each of the landscapes every few miles had its own beauty. When arriving at the trailhead, we set up camp and called it a night. With our own two vehicles there and those of another group, the reveal of what was to be was nature flirting with us, where you can just see someone's eyes, not even able to figure out the color when the rest of their internal and external beauty has barely winked at you.

The first day was just climbing and climbing. Theoretically it wasn't that long but when you're wearing the backpack with all of the week's food and haven't worn a backpack in forever and haven't gotten used to the elevation, I appreciated the guide's advice that it's a marathon not a sprint. Somewhere the marathoner in me wanted to correct that we weren't covering 26.2 miles that day but then again I didn't have enough lungs to spare to say it at the time. Still, we hit into a natural stride to where conversations were possible at least in short spurts.

But then again, I get ahed of my myself, each day would start with things that shall we say are not my style. There was yoga, poetry and mindful meditation introduced shortly after we woke up, setting the pattern for what would be each day. I was committed to trying it all honestly, to being flexible (at leas trying to be since well I still can't touch my toes). The counselor had a voice and genuinely believing what she was proclaiming as I sat or did downward dog on my yoga mat, I questioned what exactly I'd signed up for. 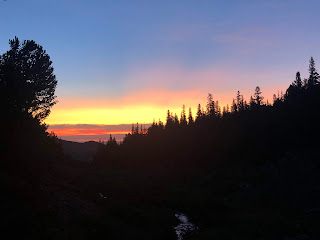 But after camp was set up and water was refilled and bleached, there was conversation. There were the simple elements of getting to know any human better, hobbies. There were the transitions into the cancer connections from the simple elements like dates and diagnoses to the complications. One of us was diagnosed at 9 and so cancer was really all she knew and it was her normal. There were comments about body parts and changes, job changes. There were relationships started because of those, some affirmed, some complicated, some broken up. Cancer is an unnatural messing of the system and here we were trying to make sense of it in a natural setting which ironically enough was foreign to most of our daily lives. It kept getting called the back country. Somehow the conversation about relationships moved to online dating and while that is an experience I never encountered, there was a line said that still sticks with me that someone was trying it but they had a commitment to doing it only if they didn't use backspaces. That was the approach I decided to use for the rest of the trip, no trying to erase, less hesitation, more going forward, at least for a week. 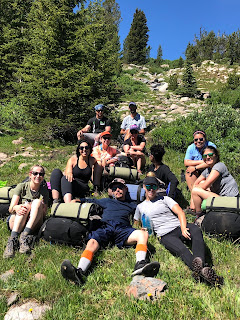 It made the thinking in the quiet spaces both easier and harder. It made the yoga poses less complicated but the mindful meditation more complex. The flowers stuck out more, the sunsets and sunrises were more colorful, the constellations and shooting stars more personal. The breaks seemed perfectly timed on the hikes. The persons and the mountains competed with each other for which seemed more grandiose to me. There was my tent mate who at 23 seemed more open to ideas than most people ever achieve. Yet in all that thinking he was always there to help someone across a river, running in if they slipped.  There was the 5th grade teacher who learned that how we tell ourselves stories about our lives can be productive or counter productive who focused on capturing stories with a camera more than most. There was the 6th grade teacher whose ridiculous idealism about human nature is exactly what I hoped my daughter picks up in middle school. There was the person who was still actively in treatment, struggling with tiredness but who instead of doing it alone helped everyone recover by leading stretching exercises.

There were the guides whose zense of humor and quiet balanced each other out as they watched for our safety and caught fish that we could cook on a stick. They would find the roses, the buds and the thorns while telling the jokes and playing the games that seemed to both distract from the pain as they helped us embrace the suck. There was the fitness trainer who worked for a cancer organization that under estimated herself even as she seemed to have energy to go up and down more to get pictures. We were all looking for a little more balance at different levels of self awareness. There was the girl who had genuine opinions about everything but the questions showed an openness to changing her own as much as those of others, other than maybe that her group had a better cook than ours. But unguarded opinions and questions without backspaces was exactly my style on this trip. And there was the friend whose therapist recommended it who kept resenting her therapist less and I kept appreciating her sense of humor more. It was the counselor who could mess with dynamics the most as some of her exercises were alone, others with the group, some still, some in motion, some talking some in silence. At first I thought it was to have cross appeal but I do wonder if it was almost to ensure that someone had some in-congruency to rewrite our oversimplified narratives. I am generally sorry most times when I make anyone feel uncomfortable but very thankful for all the ways this trip messed with me. 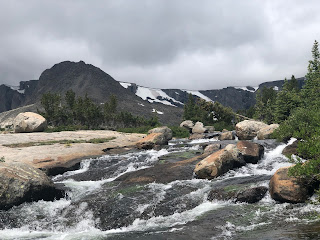 There were snowballs and cold water plunges, napping on rocks, bathroom au-natural. There was bonding over mosquito face masks, the net squad. I genuinely don't remember the insects but I remember the way some looked more like darth vaders and others like someone about to break into a store; surely one or the other scared the bugs away. There was beauty that I would call majestic but nothing other than the wind river's royalty could have made a palace with that much splendor. The week despite tough hikes and short nights since we stayed up star gazing everynight was flying by. There was genuine bonding with very early on the discussing already starting about when we were all going to get together again and another about which matching tattoos we were all going to get. I don't know whether or those will occur but it's shouting at the mountains hoping that somewhere down the road, a little further away we can still catch their echoes of us and of each other. We didn't speak in particularly loud tones out there but the mountains, water and wind will keep whispering back. On one of the hikes, I found a horseshoe on the side of the trail. The day before my roommate had found some rusty pliers. Between the two, I made it a little safer. Everyone kept telling me that it was lucky with someone sharing that depended on how you hung it up. But I keep horseshoes as one of my yard games but it helped me redefine that maybe what it has in common with a grenade is that you don't quite get its full meaning till you see where it can be utilized. Just to be close to that beauty with that speed and power is something I will never fully comprehend but at least we had similar paths, that horse and I. We both left something we thought we'd come attached to out there and perhaps it made our path down both easier and harder. 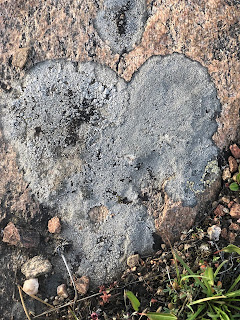 On the way out, several of us tried to describe it and we all felt inadequate. Even as I write this, I am tempted to scrub it and tell you to go take it in but how could it compare when we had such great company? I mean we burst out into a group hugs and went around a circle sharing stories about each other to close it all up. I am back into the rhythm but still trying to share it here and doing some fundraising so other people can so in the future.

I miss the backcountry and I'd not take a single backspace key to the whole experience. I haven't had spatial orientation since brain surgery but somehow the sun and waterline and mountains were clear enough to where GPS was unnecessary perhaps why this is called True North Treks. I've lost some language skills from this but it didn't matter out there because it would leave anyone speechless. I've lost some memory skills but I have no confessions on what I don't remember. It doesn't matter that some of life might not have held in my brain because that scenery was one of those things that if you think about too much, your mind may get overwhelmed and so you absorb it and just let it sit in your heart and soul.