Walking Down the Aisles


Well, Elaine and I are finally getting serious as we're getting ready to walk down the aisles. That aisles is not a typo. We've been dating for the better part of 3 years, she moved in a little over year ago, and we've been engaged for about 6 months but this week we got a joint Costco membership. I mean now she will know just how much I like me some mass purchases. I've always said if they don't sell it at Costco, you don't need it (no I am not in anyway employed or sponsored by them but I really did buy my house partly because of how close it was to Costco). But I mean this is a serious commitment now.

Actually, what is good is that the wedding on 8/18/18 is now 88 days away. What's important about that is that I know it, I have a reminder on my phone or a countdown really but what's fun with it is that I don't know exactly how many days till my next MRI. I've been measuring life for the last several years from MRI to MRI, really only until recently looking past it. I still get invited to speak and in the speech I gave to an all Hispanic Audience for the first time, I told a bit of our dating story and my proposal but I also ended with the reality that I still have brain cancer but between the MRI and it's results I have the Moonlight Margarita which is a 5k with good drinks at the end. I tried to be hispanically clever near the finish with the line of " I don't always get to control the beats and rhythms that life throws out at me but I figured these legs and that drink will make it a little easier to dance."" But actually while the speech was well received (it ended with people so cold afterwards that they stood up to stretch out and rubbed their hands together in a clapping motion), it was actually the toughest delivery I've ever had because dead center there was a table full of hispanic women crying. Somehow in my attempt to make eye contact and in the fact I still have emotions in this damaged brain I had to take 3 unexpected pauses to not cry at my own speech where I wanted to be like don't worry ladies, I don't die at the end of this story, at least not yet. 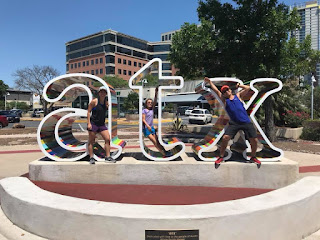 It seems around this season I have at least one race scheduled every weekend. It's almost my tradition but before it was therapeutic. I think this time it's just for the run of it, wondering how long the legs will hold speed, not how long the brain will hold cancer back. The focus of the future has been the details of the wedding, some jokes about the silliness of the sacredness of this human ceremony. But in little races where Kiana PR's or Elaine PR's or we do a team scavenger hunt which last year we took 1st and this year we took 3rd and I go, okay hope we can do this again next year and still place but the if is just that there would be no conflict, not whether or not I'll be alive. Believe you me, I still wonder and worry but while I took Greek, I don't do Hubris. The honeymoon will be in Greece by the way, seems appropriate for people that met training for a marathon and got engaged at the beginning of a Spartan. But now the future is something that I dare to dream out loud. Someone who I hadn't talked to in a while even wondered how Elaine moved the mountains that I'd put to protect other people from my future. I don't have a good answer for that but I hope no one regrets it ever and certainly any time soon. I haven't completely forgotten about it, nor have my nightmares as I dreamed recently that in the MRI my tumor had grown and we were trying to decide whether or not to proceed with the wedding with a predictably shorter life span (we did) and whether or not to tell many people that this was coming (I woke up before that decision was made in the dream). Not a fan of the dream but in the scheme and pattern of the last few years, I prefer that my daydreams have more joy than my sleeping ones because in those I have a choice.

The custody thing went almost entirely as I'd predicted and 98% in what I'd hoped for. It's still technically not done because legal documents aren't signed. The judge had a few cases and so it took almost two months to get to the ruling but while the facebook nod was that Kiana would still be spending most of her time here, the truth is that she'll now be having slightly more time at what I call home. The universe  has been kind enough to reward the one thing in my life I feel like I've focused correctly on and I'm thankful. 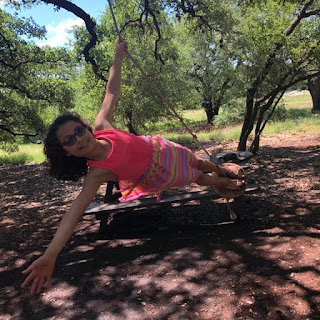 Kiana has 5 days left of 5th grade and then she's no longer in elementary. She never calls herself the next grade till it has started but she'll enjoy being a 5 1/2 grader for the summer. She got perfect scores on her standardized testing so at least one brain in the household still works pretty well. But she keeps a fun balance as that picture on the swing shows with great grades, making the theater team at her junior high and recently doing her first timed mile at a 6:06. I don't recall but I'm not sure my first timed mile was that fast. Not that I'm bitter or anything. 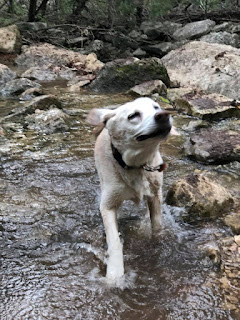 And all 3 of us are still swinging, running together sometime, sometime separately. Some are disciplined runs, some are philosophical runs, some are ones where we end up taking a break in the middle to swing into a river after a rain storm. Oddly enough the death in my household that I'm the most worried about is the 4th soul in my household, my 14 year old dog's, Puppy. It's funny the venue for our wedding stated that dogs can be there for the ceremony briefly and I thought that was so cheesy when we booked it. But now as she struggles when we get in the car and the stairs and the walks are still fun but growing shorter in her old age and Texas rising heat, I wonder if maybe someone is going to end up being my favorite guest by bringing her and taking her home. I don't think she'd care but if she's still around, why not have the whole family? Have I become one of those cheesy pet people?

I guess I'll be in a machine in a couple of weeks to see if I keep being part of the minority with brain cancer. It may show the stressor of it that I have a 5k the night before the MRI by myself but I'm learning because between the MRI and the results, the 5k I'm doing it I'm being joined by both Kiana and Elaine and the ARC board as I start my 4th year as President. I'm looking forward to the fact that I have promises to keep and miles to go before I sleep.

When Kiana says I love you, I often respond with I love you more etc in a cheesy back and forth. Somehow until recently with Elaine when she said it or I said it, it was always I love you too in response but recently I started with I love you more as the response once in a while. She joked that she wondered if it was me being competitive or affectionate and of course it can be both which is what I would call a win/win (for those of you who think life is not a competition, just realize that at your conception there was this big swim meet with thousands and thousands of swimmers and you won, that's how you were born! I just have kept that spirit up!). But believe you me with everyone I love, I'm always going to try to be the one who loves more because well I've been a costco member since I was in college, so I like to do things in bulk. And if every once in a while that gets messy because love can be complicated, well love is something I hope that those around me are willing to clean up in the aisle.
Posted by iramjleon at 7:52 PM No comments: