I am the second of three young men and while I have one, it takes no degree in psychology to diagnose some issues about middle children. I was never jealous of my older brother so of course I didn't super focus on soccer just because he was very good at it. I was never jealous of my little brother getting more attention when I was just a few years old nor do I care now that he's a better cook than me. I don't even remember that they took turns attending my graduations even though I attended both of theirs... but I digress ;). I may be showing why the strengths I have that are different than the ones I have are ones I'm super competitive in even if I'm the shortest of the three, the least handsome. 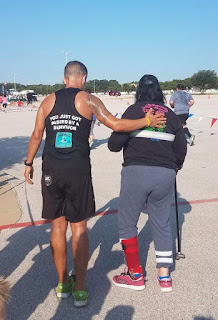 Seriously speaking though, in an age where we seem to struggle with self value and come up with ways to cope by labeling everyone as losers or winners or having a lot of participation trophies... my diagnosis is that most days, most times, almost all of us lie somewhere in the middle and well childhood prepared me well for that. While I've certainly heard some people who struggled with it, I don't really remember a moment where I felt a lack of my mom's attention or affection due to my birth order so somewhere in the middle wasn't so bad.

In fact, even as I get invited still for different cancer events or races or speaking engagements, I know that I get invited because I've won and placed in races. But with rare exception and probably still, I finish with the story of my mother finishing last in her first half marathon. Of course I always mention Kiana and how somehow this kid has never not PR'ed but perhaps... perhaps I'll find a way with the invitations coming up to to highlight that well just by the nature of it, while she's having personal victories and of course age group victories, she's usually somewhere in the middle and in my book there's nothing wrong with that as long as you're pushing. 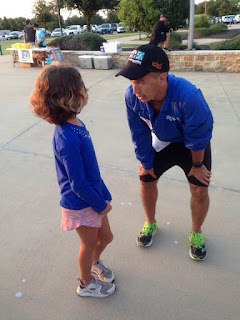 Speaking of meeting in the middle and pushing, some races have gone very well recently. The BrainPower 5k, the race that was announced on my first birthday after brain surgery, the one where it was my first win since college, the one where I was the top fundraiser, all of which combined to make me realize it wasn't time to hang up the running shoes just yet was less than two weeks. Like a recipe that keeps improving or that small decoration or remodel that makes the house feel so much better, this race has continue to add in its special memories to me. It was my mom's first race one year, it was Kiana's first 10k. It's been one where I had the biggest team, the fastest team. It's one where I've met some great brain tumor survivors even as the frustration grows in seeing more 'in honor of' and 'in memory of' signs. But stressors and damage comes in life and that part of the story may be inevitable but we get to write how we react to it. 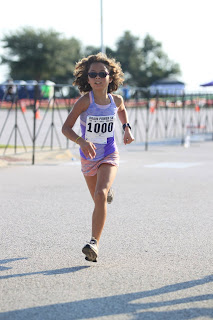 I won it in it's 1st year and thought that was an eye opener but it was just a blink in the end. But 3 years later in it's 4th iteration, I would win it again but when the awards ceremony came I wasn't around. Because there finishing last with some help from a nurse navigator and a member of my team was my friend Minerva, who diagnosed only a few months later and having sat through rehab was slowly moving forward and I was at the finish line cheering her on. I missed the awards ceremony that year but I saw something much more important. She's had 5 brain surgeries since being diagnosed, has had too sit through way too much rehab. I've visited her at her hospital, at her home and she reached out asking if I could push her in her wheelchair. We upped it one and there was an Ainsley's angel who had signed up to push someone in an adult stroller but thought they were just in shape for the 5k and I certainly didn't want to nudge them. It kind of was a good compromise cause I was planning on running with Kiana for her 5k. Minerva wanted to do the 10k because she had never gone the long distance the race offers and I said I'd push her for the 2nd half with it being a double loop. Kiana's race went very well. She now has her own GPS watch (my previous that looks gigantic on her but she loves it) and I did not pace her, just told her what pace to go. She got her fasted 5k by a little over 30 seconds for an exact 23:00. 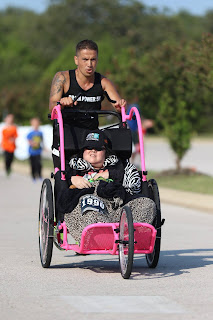 I usually struggle with her growing up but this was one of those days I needed her to and we had talked before the race about what she needed to do afterwards while I went and did my second loop. I didn't include dancing in those instructions but somehow she managed to pull that in. But the second loop was magical. It was the fastest Minerva has ever moved on non motorized vehicles. The first loop well let's just say they were more polite than this guy because they would say excuse me and walk around or wait when there were large groups of people (probably the proper etiquette). On my loop, it was me shouting on your left, zig zagging, getting on the other side to move as fast as possible. I am not really in stroller shape these days and it would turn out I'd be sore the next day but Minerva said it was a lot of fun to move this way. Kiana won her age group, Minerva won her age group and even with me pacing these two lovely ladies, I took 3rd in my age group. But while Minerva credits me with her signing up for her first one and I think it an absolute wonderful memory to see her spirit take her to be the last finisher, meeting literally in the middle of this one, the story didn't end just that cleanly. Minerva I think thought that since she is not as mobile these days that I'd be pushing her across the finish line but that's not the way I view her capacity or the university so when we were to that last straight away that I once cheered her on, she got out of that stroller and slowly but surely, she got herself all the way across that final section of the course. There wasn't a moment I wasn't beside her in case something went wrong because us brain tumor survivors you better believe we've got each other's back. A local paper covered it in case you missed it but like pretty much everything ever written in this blog, it was far better experienced in person. 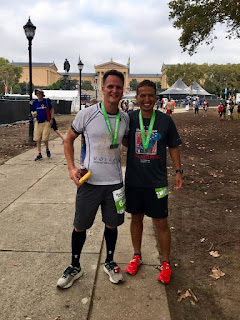 Only a few days later, I'd be headed to Philadelphia to run with Voices Against Brain Cancer in the Philadelphia half marathon. The guy who usually recruits us, Kevin Ogborn got motivated to run his own first half marathon as part of it. There were 3 of us out there who managed to raise almost $3000 for the cause (not to late to donate). It was a gorgeous and fun course and like with Minerva I was there cheering Kevin's finish at his longest distance yet. I was inspired by a guy literally stepping into new adventures for the cause.

In both of those races because of my pace or pacing, I was somewhere in the middle but afterwards, Kevin was received by his wife and two daughters. Minerva would go home to a happy mother. In both Philadelphia and Austin, I'd have my girlfriend Elaine (who by the way placed 2nd in the brain power 5k and 4th in the Philadelphia 5k). Kiana and I were there for each other. I was part of and had a team in place for individual events everywhere. At the Brainpower 5k, my team might have taken plenty of the top spots overall and in age groups. Many of those people have been part of several of those races but I appreciate them all.

I mean there are people on my team who I've trusted with my daughter, with my dog, with my house, with financial things, with emotional things. I've passed by them in the middle of races and streets. 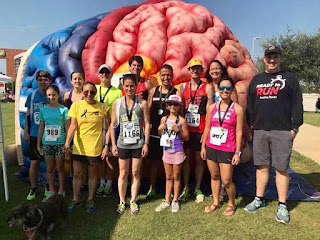 I've got a friend who jokes that he's really good at 2/3 of the relationships, the meeting them and getting a date and the breaking up part (ie there's no drama). I heckle him that that's like being good at the kick off and the closing play. Generally speaking it's the rest of the game that matters. The people who are there during big victories or big losses are memorable because those moments are easier to grasp in retrospect. But perhaps as I'm getting older or just plain getting old, I am more aware that it's the people who put up with you when you smell on the way home from an average slow long run or do those with you, the people who help you clean up after the party, the people who join you for the shopping or the picking up dog poop, the people who help you put away the dishes, those are the ones that matter the most, the ones that join you for the middle of the road stuff in life. It's too easy to overlook them sometimes but these are the relationships I most want to work on, these are the relationships I most want to keep.

Every once in a while when I share these stories on social media or in person, it has been suggested that I write a book. I always shrug it off because it takes a cursory reading of this blog to see how bad my writing is. Still someone recently suggested it on my facebook post that they'll pre order my book and I commented "Once upon a time, there was this guy who put one foot in front of the other. The end." Someone wrote a great follow up comment which was, you're nowhere the end. That comment, that moment, from childhood till today, I am thankful to realize that for me right now, the middle is a good place.


Posted by iramjleon at 8:33 AM No comments: