The Name of the Game 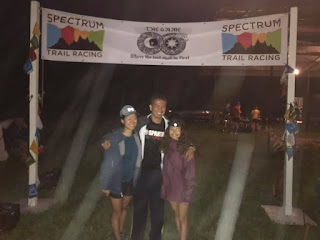 I've been playing sports for so long that when it's time for anything important to happen, I almost always declare it's game time. That's been said before speeches, tests, interviews, and almost every race. For the first time ever in my life, this past Saturday it was 100% correct at a race. Elaine, Kiana and I were signed up for the Game. It's a race that has a 4.167 miles of an out and back on trail where you leave ever hour on the hour. The reason for the random distance is that if you last 24 hours it would be exactly 100 miles.

Before this, the longest Kiana had ever run in one day was 13 miles, the longest she'd ever race continously was 10. Before this, the longest Elaine and I had ever done continuously (and that's arguable due to the obstacles) was a 50k Spartan ultra. The longest I had ever run in one event, a Ragnar Ultra was 36 but that had multiple hour breaks between the 3 times I went out there. Kiana had committed to doing at least 4 originally but then they announced whoever did 5 got a cap and she started saying 5. Elaine said she wanted to do 8 (pretty good number!) and get 33.3 and get her highest single day mileage. I made it my goal to fail out there because I couldn't get back in an hour not because I wouldn't start a round, the way almost everyone completes it. I wanted to fail on the course, not at the start line, get my first DNF (did not finish).

The race was a little ways out for a 7 Am start so it was a 5 am alarm. My parents had come into town in case I was dumb enough to last well past Kiana's bedtime, they would take her home. In simple honesty, I thought I would last 50 to 60 miles, not so much because of the distance but because of the pausing. I've played sports and it was the long breaks or bye between rounds where I always hurt the most and I thought those would accumulate for me. 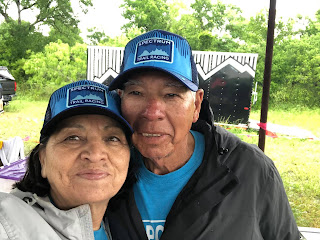 Round 1 was nice and steady, there had been rain the night before but it was all still pretty solid but damp. Round 2 it started pouring like crazy enough to where I thought, we better be getting some doggone good May flowers from these April showers. Moments after I warned Kiana to be careful, I took a serious fall. It was primarily reflex from sticking my arm out and my shoulder tweaking out of place. It kept popping regularly, enough to where I had the medic tape it since it was a bit of a nuisance. Turns out your arms are engaged during running. Round 4 was a prim, there was a prize for whoever came in first. I didn't care about the prize and multiple had said specifically that if you wanted to last a while you should ignore those. But as everyone knows, I'm not competitive at all so I took off fast. There was a friend right behind me for a while and so I didn't give up off the throttle until a little after halfway where I realized I had a solid margin on him. I did that round in 34 minutes, could have done it a few seconds faster but just having fun with the game, I crawled in the last 20 yards, exhausted from smiling.  Round 5 had more rain and hail and thunder and lightning. It had a 30 minute delay so more sitting around. Kiana and I were heading back where she had pushed herself to get her cap and she was trying to decide whether or not to take on a 6th. She said well I'll definitely do a 6th to get to 25 but maybe I'll do what you're doing and just run till I fail a round. Like the great father that I am, I said well I'll keep running next to you unless it's too close then I'll hurry back to not get DQ'ed. I did from that moment on though start running behind her to make sure she was keeping her own pace. After we earned our caps, Kiana proudly took hers. Elaine and I had brought our own so we brought them to my mom and dad who had brought Mexican cokes, Chips and guac, towels, more socks. They made us and them look good.

Round 6 Kiana was slowing down but still nowhere near dq time. There were poker chips you had to pick up at the turn around point to turn in with questions, some simple like chocolate or vanilla. Others were a little more philosophical, like hardest thing you've ever done, biggest dream. We did that last one with all 3 of us together and chatted it up. Kiana on the way out was thinking maybe one more but on the way back decided 25 miles was a nice round number plus they were making pizza at the start. I got both honest criticism and honest praise of the quality of my parenting about letting her run that long.

Round 7 and 8 were Elaine's last two and she was committed to finishing what she started. We ran them side by side and chatted some more about the weather and the mud. When she finished her last one, she said she would get changed while I was out on number 9 but they announced that it was going to be a prim. Several guys said they weren't just going to let me have it but only one really took off with me. I was in the lead the whole time and I never look back no matter how nervous or tired I am because anytime anyone has ever looked back at me at a race, they just became my biggest cheerleader. Still, when I passed my family the first time, they said you have a 30 second lead. The second time they said you have a 23 second lead, the 3rd time they said you have a 15 second lead. He was making up space. There was only one long section or gravel dry road around mile 3 and I put my head down to beat him. It would be the fastest round of the day, 32 minutes, this time moon walking in the finish.

The next round I'd take it very very slow just to let some recovery build up but I started noticing the other runners more. The guy consistently in the lead was keeping a very steady pace. Most people were. I was just running by feel and found that changing up speed helped the legs. All of a sudden a strong wind picked up and the guy who runs without a shirt in 30 degree weather was getting cold. So I started putting on a shirt and jacket in between rounds but then just started running with one. I was somehow both cold and continuously sweating. After 10 rounds, I said well only a couple of more and I'll get to the minimum I'd hoped for, 50 miles. Some people were saying, one round at a time but each time I was getting near the finish I'd think two or three ahead. When I got to 50, I thought well the kid born 8/8/80 is at 80km but I can surely get to 100 km and 13 loops. When I got to 12 loops, I thought well I definitely hope I don't fall apart at 13 that's bad luck. When I got to 13, I'm like well if I get to 16 I'll have gone twice as long as Elaine. Every once in a while I gotta last longer than her. While you can read the double entendre there, our first trail race together she did 30k while I did 10k and there's been other races where she's been doing the longer distance because she has more tolerance for loops than me (speaking of double entendres, see she can handle monotony).

When I got to 16 loops, I thought well let's get to 18, I'll be a legal runner on this game. At that point, I thought well once I get to 21 I'll drink something alcoholic just to make a point. I was actually feeling pretty good at 18 and with just two hundred yards out on a sharp turn, I tweaked a knee. I walked in the last couple hundred yards out. I said to Elaine I think this round may be where it comes apart, this is swelling fast and I don't know what it is. Earlier in the day when I'd fallen on my shoulder, two rounds in, I was sharp enough to say tape it. After some sleep, I wonder why didn't I think of tape or icy hot but I was barely thinking much less thinking straight. On loop 19, I got to the turn around point at about 29 minutes. Now in almost every round I actually did the second half faster than the first but I was struggling. I decided to ignore my watch and just finish that 19th loop but it would be too late. Still with only about a quarter mile to go, a runner passed me clearly hustling to make the cut and I followed suit but still couldn't run and so sped walk ran in pain till I got to the start line with about a minute to spare. By this time, it was night time and we'd been running with lights for quite a while. A couple of friends of those left said they could tell which one was me because the light was bouncing very sporadically, my stepping had become uneven. Still, I was there with time to start and start I did. I took off running but it didn't last long. I'd get a little overhalf way before the full hour passed. Elaine had come to try to talk to me but I told her to leave me alone as pacing was against the rules. When it was done, I went and apologized to the race director my friend Jason for not lasting longer. He hugged me and said no apologies needed. We got in the car and while the drive home was supposedly 45 minutes, I blinked and when I opened my eyes, Elaine said we were one block away.

A DNF is a DNF. There is no way I'll be proud of failing well ever. Could I have figured out a better way to put the pain away? Maybe. It was cold out there and I was literally physically shaking between rounds. Maybe I should have accounted for that and brought a long sleeve shirt. Could I have better planned out nutrition? Maybe. The winner I would learn after I woke up went 23 rounds. Somewhere in the night I'd wondered if I could hit the 24 hour mark and run a 100 miles but at least that night no one did.

Still, it was more than double the distance I've ever done in a single day. This race has no finisher's medal since only one is the finisher. Still, somewhere whether the failure was mental or physical I'll never fully know. I'm glad Kiana, Elaine and I got to be players in this game I love. I've had many failures in my life but this is the one I'm most proud of.
Posted by iramjleon at 7:36 AM No comments: