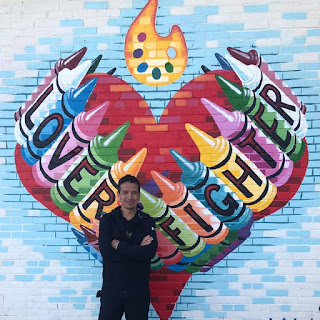 I got myself in trouble a few months ago when I deleted someone's post off a facebook event where a few of us were the managers. I had put in the info they shared plus a little more and I thought well, one has that and then some. When they questioned why I'd deleted their post, I said I was trying to avoid duplicity. In Spanish and English, duplicity can mean both deceitfulness and repetitiveness but the stronger connotation is opposite in the two strongest languages of my heart and mind. My mind not remembering the right one in English hurt someone's heart and I'm fairly certain that the damage I caused was something I've never managed to restore correctly despite multiple apologies.

Someone pointed out, I hadn't blogged once this year and it's true. But this was never a diary (dear diary, I hope I get chocolate for V-day) and blogging was never something just to check off on my list of things to do: (item #1) make a list of things to do. It was always as the title itself says An Incredibly Raw and Uncensored Blog of how a Guy copes and hopes with brain cancer and life changes. The less I blog the less relevant brain cancer and life changes are. Let's be clear, I still have brain cancer but the changes from it are the new normal. The other life changes I've had, marriage have been so happy and smooth that it's tough to write about anything while not sounding unusually arrogant: "genuine conversations, better meals, great sex. Married life is good" Plus, you know, my mom reads these entries. So anything I write about would really be duplicating previous entries and while my memory is still damaged, the ones I want to remember now take simple pictures or notes. It's like a new mural I visited recently, pictured above, of lover and fighter. I saw it on a friend's social media who said they were a lover not a fighter. I went out of my way to see it, and unlike my usual style, I posed with it because while it's a bunch of crayons it's tough to see that they resemble a bullet vest. Plus, while I have no idea what the artists intent was, there's certainly no implication in this piece of art that they have to be mutually exclusive. And so for me I liked it because I think I'm a lover and a fighter and well I try do both colorfully and with full heart.

I am and always will be an optimist but in simple reality the optimism I have had with cancer was simply about beating it with lifestyle, never about beating it by not dying. I let it limit me in many ways, keeping some connections at bay for fear of damaging them (or was it me?). Some people may not call that optimism but I think it is similar to what Del Toro wrote "optimism is our instinct to inhale while suffocating. Our need to declare what needs to be in the face of what is." While not mean to be punny, my optimism has improved. 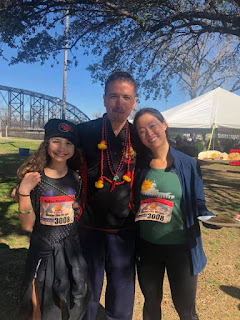 The truth is my mission has been to revisit some of the cancer journey and make it better, harder core, less afraid. The first marathon that I did after the win that inherited so much media was what labels itself as the hardest marathon in Texas, the Miracle Match Marathon. It was where I carried Kiana in a stroller up a set of stairs and gave up 3rd place because of it. Those same stairs took me from 1st place to 5th place when doing the half down the road. This year, this year was my favorite because we went back as a trio, Elaine, Kiana and I doing the marathon relay with Kiana doing the longest run she's ever done on her own, a little under a 10k, Elaine taking it to about the halfway point and me finishing the rest. They ran as a bird flies to Jacob's ladder and we ran it up together (okay maybe thy beat me up cause they were more rested). We were the fastest team out there and combined we pulled off something I've yet to do, go under 3 hours in a marathon. Many people have asked what my favorite marathon is and I thought at one point the one I put off brain surgery would never get passed but then I won one with a stroller, than there was... My favorite one so far is that one. 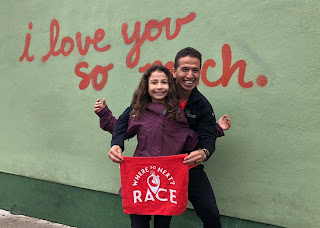 Shortly after winning that marathon when Kiana was just 6 years old, we passed by the iconic I love you at Jo's Coffee, I love you so much. I picked Kiana up spontaneously and we took a picture, literally 1 and it was framed. A few years ago, we duplicated it a little more intentionally. I framed it on top of the other one. Coincidentally, by chance it was a check point on the Where2NextRace that occurred last Saturday. We won that race, which came with some small cash winnings which will lead to Kiana starting her first bank account. Time to update the frame again. I loved it and love her still more that it's more side by side. But that's not really a life change, it's just an upgrade. 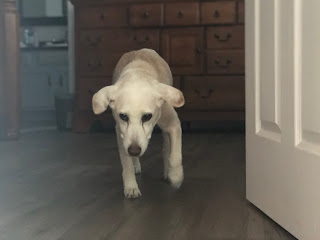 Of course, it's not all up and up. No one has life that smooth. I still have too many funerals to go to or people who tell me about their relatives who have stage 3 or 4 of this. I never really know what to say even after doing this for several years. I just go with a solid hug even if I can't manage how to be a shoulder to cry on. There is a death coming far too soon in my own life, which is theoretically mild by comparison but my 15 year old dog's heart is giving out. If it weren't breaking my own so much, it would almost seem appropriate hopeful romantic for it go for a dog that's lived life resembling her owner, with a full heart. That's a tough struggle and she gets a lot more treats and junk food than she ever has and I have no apologies for that.

There are a few races I did behind a stroller that Kiana still hasn't gotten to do and I've definitely got a mental list that they'll improve if and when I get the privilege to do it next to them. So life in general, like my tumor, does not have clear boundaries of what it does and doesn't affect. But thankfully, at least for the time being, the poetry of my life while still flowing freely rhymes more often. But while it does, if life is an art, I'm thankful to know where the lines are are most days but be assured that I still appreciate and take advantage of the choice and ability to color outside them. 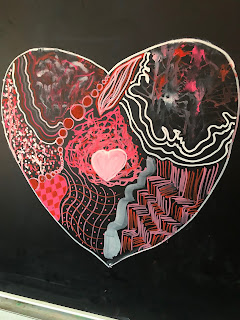 Posted by iramjleon at 2:46 PM No comments: