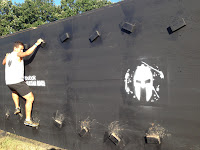 When the Spartan race was in Austin, I got to participate in it. It was a shorter distance than with lots of obstacles over just under 5 miles… While running with a stroller and picking up a kid build some upper body and core strength, she weighs less than I do and it’s my weight I had to support. (I was written about in a blog there http://liveepicbeepic.com/texas-spartan-race-with-iram-leon/ and made Spartan TV http://spartanrace.tv/?v=burnet). While I guess I did respectable in it both days… in my view, well it kicked my ass. Then this weekend I got invited to the Chicago Super (a little over 8 miles) one and can I say well…. It kicked my ass. 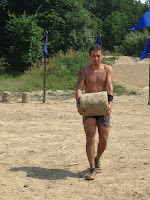 What bothered me the most was not the fact that I couldn’t keep speed. I can count on one hand the number of times I’ve done trail running and that was by far the most mud I've ever mucked through with it getting knee high. I am amused at the fact that they call it technical running since for most of human history, we didn’t have tracks, pavement, stairs or sidewalk or flattened out trails for running. These ways are a recent development and runners the rest of the time were trying to figure out how to do it like they do it in the Spartan races, through mud, up and down steep hills… But as a girl noticed on the trail, I seem to hesitate more and watch my feet more carefully, afraid that I’ll fall. I fell multiple times, had the shoe come off once. All the obstacles were physically and mentally tough with the only somewhat cheesy one being the spear throw but hey if you want to be a Spartan…? 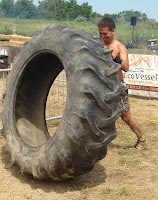 But what bothered me most on the first one in Austin was that I nailed all of the obstacles except for the monkey bars…? Who can’t do monkey bars, didn’t we do these in elementary and junior high all the time? Apparently if you stop doing things in junior high they don’t just magically stay with you when you’re 32. In running and cycling, my workout attitude is to work out by practicing the activities you want to do. I do some basic push ups and pulls up and sit ups but not nearly enough. With the Spartan, it’s not like I’ve got a huge tire I can flip or big concrete blocks to carry across my yard but Kiana and I are at the playground often and the monkey bars are there. Kiana did them with more ease than I did and she tried to comfort me by saying well dad you’re fatter than me… that’s when she learned the word heavier. When you go into a distance you haven’t done in terrain you don’t know with obstacles that you have to learn… I don’t expect any great performance but I give it my all. I did the race both days, doing it faster the second day than I had the first but as cheesy as it sounds, the thing I was the most excited about was that I had gotten across the monkey bars finally.

Still I made a few wrong turns and got helped out by spectators, volunteers and other participants. Running through the woods is a whole different game but as I started and they were kind enough to let me run with the elite guys I just remembered Frost  “The woods are lovely, dark, and deep, But I have promises to keep, And miles to go before I sleep.” I slept well Saturday night and Sunday night. And Monday night. And Tuesday night. I have gotten asked by media and people how do I do all this and I answer the simple truth, it literally is just one foot in front of the other. The Spartan race is a little more complicated sometimes it’s one foot on a balance wall or going over a high wall or your arms are working like feet as you scale up a mountain. The comforts of road races are missing and you get mud in places that you weren’t expecting and hurt in muscles I didn’t even know I had. There are some people who want to keep doing a certain distance like the 5k or the marathon or the century and improving on them. I certainly do that sometime but I also, trying to live up to my running slut nickname, try to take on new challenges, mostly physical since the brain isn’t what it used to be. I’ve quoted Fun’s “My head is on fire but my legs are fine” but in the Spartan you run through fire so not quite sure if that hold… And I quote their other song, “One foot in front of the other, I am not looking for a new life, or a new love, just a better place to die.” Do I think everyone should run a marathon or a Spartan? Not necessarily but I don’t quite get how people don’t exercise or don't do it regularly. People think and a few nag that me doing some of these things are bad for my health or my body because I come out barely able to walk after a marathon or scratched up and bleeding with poison ivy after a Spartan. But I really do believe that for me, perhaps for all of us, any race course or workout is usually a lot less dangerous than the couch. I don’t know if pain is weakness leaving the body (if it is I lose a lot of weakness training and participating) but those events really do create strength in the muscles and organs that I hope are what’s pushing my brain to keep going. I’ve worn my "Make Him Work for it" to these Spartan events, partly because I can look down at my chest and remind myself why I do it and partly because then I only get so many shirts with leftover mud… 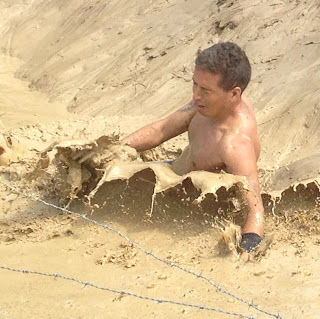 I got mentioned in the write up of the race in Chicago (http://blog.spartanrace.com/reebok-spartan-race-report-midwest-spartan-super/ where I get called a quiet and unassuming guy. There’s pictures of me shouting at the top of my lungs at the end of road races where I won and others out of frustration but in this one… I don’t have enough lungs or energy then to realize that even if I finished in respectable times that the course owned me far more than I it. 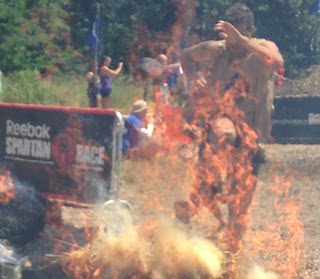 I have gotten lost on road and spartan races. I've thrown up on them but what has never been negotiable is not finishing. Last year, I signed up for the Livestrong Centuries and who would have guessed that biking was going to become my car because of the driving restriction. Training for a sporting event gave me a life necessity. Now as I'm doing these Spartan races, I hope it's not foreshadowing that I'm going to end being a guy who lives wondering through the jungle rolling in mud. Perhaps it's more like the tip someone gave me about technical running, that after you've done it a few times, you are looking not just at the next step but at first two or three steps ahead and then in due time looking at the rough path and having a general plan while getting through the next hard step with more conviction than I used to. Life has had many steps I wasn't expecting nor prepared for nor that I thought I'd be doing but perhaps... as it becomes more normal...I can move through it a little better by both the guidance of those who have gone before me, the help of those going beside me, and the reality of just getting more practice. 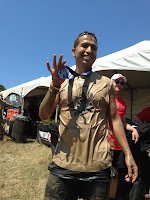 Still, the best part of the race was that they let me lead the kids race as well. They take a lot more joy in rolling through mud and jumping over things and crawling under thing and running. Unfortunately both of the weekends, I’ve gotten to do these Kiana was with her mom so she’s only gotten to see pictures. She stated it looked gross but fun…  I’ll do a bit more trail running on occasion now because life’s too short to pretend like it’s always clean. At least that’s what I think quietly and unassumedly.

Posted by iramjleon at 7:18 AM