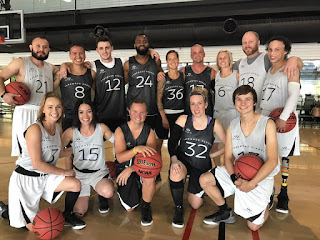 March Madness has a special place along my cancer journey. It was during selection Sunday in 2011 that I was recovering after brain surgery at Duke and if there's anywhere that college basketball has an impact it's with the Blue Devils. The excitement of hoping to repeat from the 2010 championship was there and for me it was a welcome distraction from the actual pain of cancer. There was a joy in watching people jump and shoot and dribble when I was struggling to walk for very long. Duke didn't repeat that year but without fail I have filled out at least one bracket with them every year since then, something that worked out well in 2015. 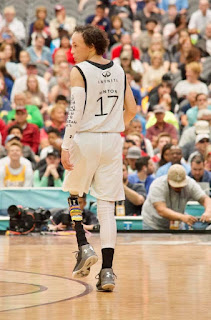 But last year Infiniti started a challenge where you could refill your brackets after every round and for every correct pick they would donate a dollar to the American Cancer Society. The games were in Houston and 14 of us got to be part of the two inaugural teams of Hardwood Heroes, designed for young adult cancer survivors. This year they moved to Phoenix and they chose 7 new local players and 7 of us were picked to return. For those of us returning, as one of the other survivors said we couldn't be more grateful to have this once in a lifetime opportunity--twice. 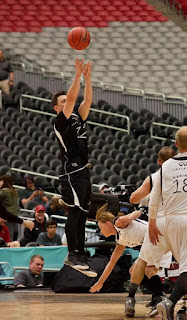 We arrived once again to work on drills, passing ones, shooting ones. There were short interviews and the photos to remember it all by. But all in all, it was what I see as the the meaning of life that kept coming out, the ability to connect not because of cancer but beyond it. It had disrupted our humanity but we were here to disrupt it back. There were stories of people who had gotten cancer as an infant with massive surgeries at a time they have no memory of because they were so young. Scars that had been huge as a child to where they were still visible but stretched. There were people who had lost the ability to have children of their own because cancer had come to them when they were children who weren't thinking far enough ahead of things like fertility preservation. There were 3 teammates who had lost a limb and it didn't stop them from going down the court, taking great shots, playing hard defense and in one of their cases Devon and I went diving to the floor for a ball... he beat me to it and won the possession.

There were teammates who had dealt with it more than once, reoccurrences, some too close each other and some years apart.. I've never been through that and as I listened to the stories it was tough to decide which one was easier to absorb. Some of us whose cancer was not fully removable who had to deal with it as a day to day aspect of life. The intensity that cancer had to deal with each of us showed on the court with no matter how far either team was ahead or behind, no one blinked on the intensity of their dribbling, passing, shooting, defense. We got to play two 12 minute halves and anyone watching saw the intensity that we had for life displayed up and down that court. 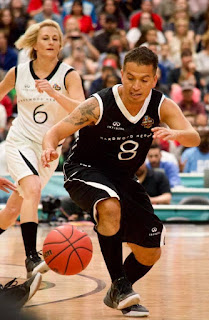 The theme for this year's fundraiser was Unbustable since you got to make new picks after every round. But like a March Madness bracket that doesn't mean you picked the wrong or right ones, it just means you got a round by round perspective. This seemed to echo many of the players life approach, cancer had made us rethink our picks. Sometimes that meant doubling down all the way to the end but often it made changing it due to unexpected upsets. There were people who had chosen to spend their careers in non profits for people with some of the issues that had come out of their cancer experiences, helping cancer organization and amputee organizations. There were others who were encouraged they had made the right choice and made it again.

What makes a bracket unbustable is not getting anything wrong... something that no one I know has ever completely mastered. What made my teammates unbustable is the ability to take the unexpected failure of something within our own systems, sometimes because of genetics or randomness and choose to reset, to take the unexpected and pick again with new options, with new information. It is perhaps fitting that we got to do it in Phoenix, a city with a name from a creature which rises it's own ashes. As people shared stories about what chemo, surgeries, radiation had left them without but the hope that got us through it, it was clear to me that we all rose up from those treatments and hospital beds with serious fortitude. 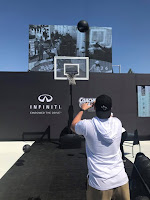 every one within 60 second. The highest person had made 16 and one of our own teammates, Lexi, made 13 within that time. Last year, Infiniti donated over $700k to the American Cancer Society through people's picks and they will do so again from the picks and these shots. There were of course formal thank you's from us to them and from the CBS broadcasters about this effort. But Infiniti makes cars that have safety features that save people's lives; undoubtedly they hear from many of those people but there are plenty who they never hear from. The good they do there will be echoed by what this donation will do. And there they have will hear from many people, myself included of how grateful we are for this chance of life. It's my sincere desire that the program can't go on forever because somewhere they were part of the road map that eliminated cancer altogether, that there will be somewhere in the future where cancer is so irrelevant because good donations led to proper research that helped cancer be part of all of humanity's collective memory, not just the Hardwood Heroes personal memories. Perhaps this game, that donation, those connections will extend to infinity and beyond. 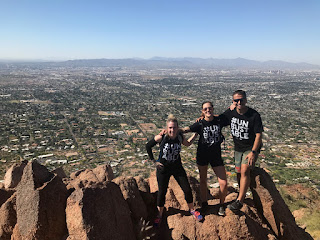 We enjoyed watching the games each day but after both nights of spectatorship, some of us survivors also braved the desert heat to climb up mountains since none of us are built for sitting around. Out in Arizona, there is no way to completely escape the heat but we'd been through tougher or as June Cash might have put it, if you meet with darkness and strife, the sunny side we also may view. A local Livestrong leader was kind enough to join us and give us water for the way. There were places where each of us had to take it at different paces but we regularly waited for each other and certainly joined up at the peak. In a complete fortuitous coincide we had all worn our #unbustable shirts. As we took in the views from the top of camelback, it disproved the idea that it has to be lonely at the top.

Cancer messed with all of the Hardwood Heroes physical system individually. By extension it messed with our friends, families systems financially, mentally and emotionally. But we're still going; we're not anywhere near done. Those donations haven't even been formally given so the way we're busting cancer back nowhere near being finished. I dream when it's all said and done, somewhere it's actually cancer that's all said and done and that's for whom the road ends completely. But until that day, the spirit that Blue Ridge Sports, Infiniti and the American Cancer Society share, I hope that spirit continues. And if you watched the Hardwood Heroes on the court, cancer didn't end us. In fact when people thought we might have been busted, those shining moments on the court showed we were just getting started. 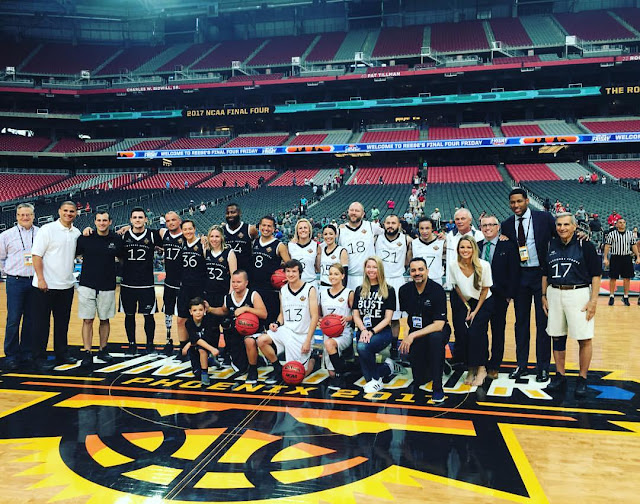 Posted by iramjleon at 8:27 AM