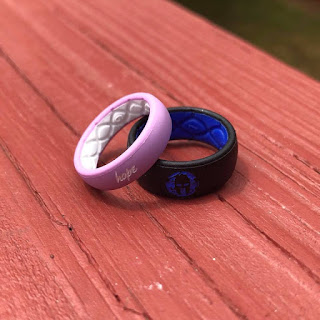 It takes a cursory look at my house to realize I love symbols, ideas. There's a print of an Escher lithograph I love of hands drawing each other onto the paper, one of my favorite pieces of art ever, reflecting an idea I hold: that in many ways, we create the world that creates us. There are two wdays that represent everywhere I've ever been, shot glasses and a gigantic map on the guest room with spots on it (thought it may tell you something about my appreciation of symbols that when Elaine moved in, the only shot glasses that stayed up there were ones where I had a trip with at least one if not both of them). We have a spot in our kitchen where the latest bib of the race we did goes up until the next one. I've worn a band consistently on my wrist that says Livestrong since I got cancer (though I will point out it also has a little metal piece of emergency contact info so it's also got a practical application).

But while I love Emerson, there's at least one idea of his idea I hope never takes over my life which is that we are symbols and inhabit them. I proposed with a ring made out of the same color and material as the Livestrong band (eventually upgraded to a metal one that also said hope and had one of those diamond stone things). Elaine wore the one I proposed with when we did our next Spartan which was extra muddy. It came off somewhere in the mudpits and she told me at the finish line. She genuinely looked sad. A while back someone gave me a handmade vase that had been a centerpiece of my table for a while quoting Emily Dickinson's poem, "hope is the thing with feathers." Kiana recently broke it while cleaning the table and cried immediately and apologized profusely. In both scenarios, perhaps not sensitively enough or perhaps putting in perspectives, I hugged each of them and said don't worry about it, it's just stuff. The truth is both of those things were special and even if sort of replacable by circumstance, really one of a kind but while I wish they weren't lost or broken, I shrugged it off as I hugged them because I knew, I KNEW that what mattered was neither lost nor broken, the Hope that they symbolized. I'm still engaged to that non typical girl, I'm still raising that special little girl whose hope keeps getting more feathers. 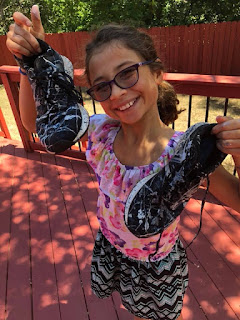 And so I'm a practical guy, never wanting to let the perfect get in the way of the good. We ordered practical plastic wedding bands, Elaine's is a lavender one that has hope on it. Mine is a Spartan Blue One (the color of their Super which is the longest I've ever covered a Spartan with having done the elite on my own and then repeating it again with Elaine, shortly after that was where the idea of proposing at one came up). They will be part of the ceremony but I assure you with this ring I thee wed or anything like that won't be part of the ceremony. I'm marrying her with my conviction, with my heart, with my damaged brain and the ring even though both have a sideways 8 infinity, could not capture that. It is just a nod. There will be several of those at the wedding, some of which all, some of which few, and a couple almost no one will catch and why not, inside jokes are fun once in a while. Kiana will be part of it... Everyone thought I should wear running shoes and I thought that was silly with a suit till we came up with the idea that Kiana could paint on them. We've been practicing and those shoes will be wearing. Speaking of nods that few people will get, she will be using the exact paint of the colors we chose for the accent walls and the front door of our house... and like her first shoes, they will be very meaningful and when they are no longer useful, we'll throw them away. Many people I love and that love me have criticized this approach to life (and look this is just how I choose to live; I'm not preaching to anyone to follow my style) but it turns out that for me if I don't distract myself by the symbols, I can focus on hugging and loving who or what they're supposed to represent. When you have a damaged memory, that sure helps. 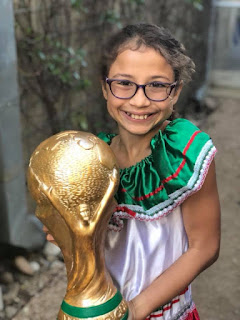 jersey Tuesday to show I support them when things are up or down (but seriously guys we're at 6 world cups where we advance to the round of 16 and no further, you're such a tease. I didn't even last with Clooney Tunes that long before I got further). Speaking of, we're working on the wedding. I would love to tell you that there are zero obligational invites on that wedding list but there are very very few. There was even a thousand dollar offer to invite someone who really hasn't talked to me since before I met Elaine. The smartest thing I ever said was you have to work on the relationships you want to keep and why throw the party where you're going to have the most friends and families to say hi to people who pretty much all they ever do is say hi to you. We've told people no about plus ones who weren't married or in a serious relationship or kids because its' a small venue but mostly because we want to hang out with people we know on our wedding. It's a party and while I'm not shy and I've made many strangers into friends at parties, this one I just want to see friends and family and thank them and God that we aren't strangers. When I pointed out we hadn't talked in so long for the $1000 offer (I said no in case that wasn't clear), their retort was that quinceaneras, weddings and funerals are for catching up and then you get back to real life. Maybe that was the way it was once upon a time and in some places still is but if people aren't there when you're down, or aren't there for the daily mundane stuff, I just don't want to feed shallow connections while feeding good food. If that offends any people who made the list, they can skip the wedding and my funeral. I'll be happy but distracted at the first and not even paying at the latter.

We really are trying to focus on this wedding. We realize that some of our best friends we don't have many pictures with and it bothered me very little because we were so into the activity that why break it up. I'm a guy with a damaged memory but I've got wonderful ones with so many of these people and so we aren't going to fix that at the wedding, I hope we're going to continue it. We're drafting an email to guests and I hope people respect a paragraph that someone helped me write (my version might have been a little more blunt):

We don’t have a #hashtag, there’s no videographer, and you’ll get thrown into the fountain with your phone if we catch you doing Facebook Live or making an Instagram Story. We aren’t going to be posing for pictures before or after and the photographers know we only want genuine interactions, so please don’t ask us to pose; we want you take it in through your eyes not a small screen! I’m not sure we’ll ever get another day with so many of our close friends and family in one place so hug us, chat with us, play a game with us, dance with us, have a drink with us, and help us make meaningful memories with our guests.

The thing about having had cancer for the better part of 8 years and having been to too many funerals and hospices is it really has helped me evaluate life and death better and how other people do it. I certainly am not arrogant enough to think everyone should do it like me and am annoyed at the people who think so much of the correct path through cancer, to death should be universal. I just want to see people and believe you me, I guarantee you our hearts will be filled with good memories from that day but there won't be any traditional posed pictures that get framed in this house from it.

These blogs are all train of thought so I think I've lost me now so I've probably lost you. But there's a shelf full of mementos from races Elaine and I have done together, there's a medal hanger from joint medals Kiana and I have done together. I am writing on a laptop with thousands of pictures saved. I have a bin full of art Kiana has done, a few picture frames with some great memories. I've been emotional at the singing of the Mexican national anthem from some childhood memories. Medals and race stuff will be part of the wedding. But despite all those symbols, I got to be part of a conversation recently of what you would run in to grab if your house was burning down and I was honestly surprised at some things (no one I think chose anything practical, just symbols/mementos).  I said I wouldn't grab anything, let it burn rather than risk safety for stuff. If Elaine or Kiana or Puppy were in there, there wouldn't be a fireman who could stop me from taking a chance to get them out. But if they were all by my side, I'd give them the same hug as when that ring was left in the mud or that vase crashed into the tile and even if they were plenty sad, I'd hug them and be fully assured that not an ounce of hope was lost or broken. 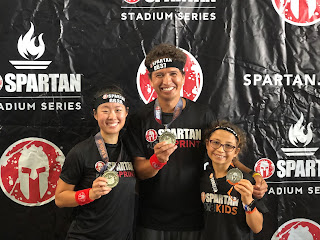 Posted by iramjleon at 7:46 AM