While today's title is two weeks notice, I went the better part of two months without nothing in here. It's not that life has been boring or even extra busy but for the most part it's been irrelevant to the brain cancer stuff. That, that is a good thing in my book.

There has been the most contested and contentious election I've ever been a candidate in the pursuit and arrival of the ARC presidency. It's an odd stage and age of my life today because it seems in choice, big and small in democracy the people we disagree with we decide they are harmful not just wrong, almost exaggerating the purpose of a small non profit running group with petty shots taken not just at me but my wife and daughter. It's bizarre. Still, we've started with a great new board and I believe in our future. 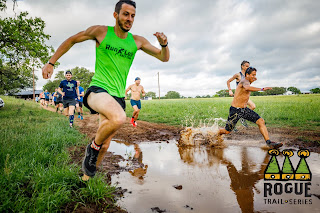 It was disconcerting enough to where I even took a break from running races and two weeks of the easiest running I'd done in years, some of the positive association at least slightly dislodged. While I did a race almost every weekend in February, March and April, I had not done a single one in May. I mean I concluded April running through mud but the mudslinging was a little harder to stomach. Two people who were elected resigning before even a day of service was also disconcerting.

Nonetheless, as of Friday, I got the reminder that my next MRI is two weeks away. I've gotten to go about a year without staying in that machine, without a proper cancer picture. If you think social media gifs can be disconcerting or that holding still for old fashioned cameras was annoying, this always takes it to a whole other level. It may tell you something just how much running is my therapy because I'm already at two athletic since Friday and will do 4 more before the MRI, the usual behavioral pattern right before that 'screen capture.'

But the pattern of how I handled being disturbed is now going to be disturbed itself. For the first time in several years just due to the weekend, I will not be receiving nor taking the MRI on the 8th of a month. Call it silly to be that superstitious or even a little bit stitious, but it has me nervous. A random headache, the dehydrated runs due to rising Texas heat make me wonder if it's just a tumor growing. It'd be dishonest to say I'm entirely unworried that I won't be apologizing to Elaine that I couldn't even do one full year of marital bliss without cancer growth. I always live off hope but I bet on statistics; it's why I win poker as frequently as I do including last night. 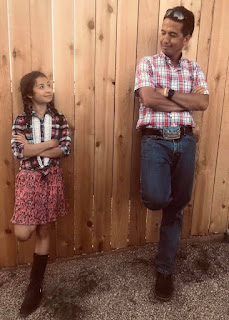 Stil, I am taking it all in stride and have made sure to run with friends and family in the last week. Some people dance to the beat of their own drum but I'll dance no matter who the drummer is so we've caught a variety of music lately even taking Kiana to her first country show and her first comedy show recently. It's a fair question whether questionable lines delivered as singing or delivered as comedy made me question my value as a parent in what I expose her to first.

Still, I've been running tired a bit more but running trail more. Elaine and I were in California for a wedding exactly 9 months to the date of our own. We ran on a trail in the redwoods and on the northern California beaches. I've always said northern California is where God lives and I'm glad he lets me visit once in a while. It rained some of the time we were there and we utilized that time for wine tasting so turns out there is still some turning water into wine near the divine.

But in those runs and in local trail runs some soccer instincts have kicked it when I tripped where I didn't do the natural thing of sticking out my hands or rolling into my shoulder but rather keeping a vertical horizontal line to keep moving while falling and then keep running. I know it's silly but when it happens 3 times in a week's time I've genuinely wondered if somewhere the damaged memory is recessing to a time and instincts of a sport I haven't played in so long. The feared emotions that upcoming MRI's bring are creative and absurd. It rained during that wedding but hey love is rain or shine whether or not the sun comes out. 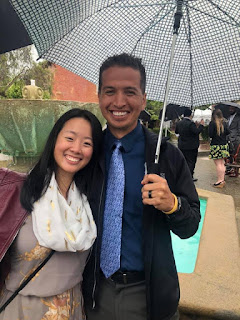 So I suppose that's why I write today, to give my two weeks resignation notice. In two weeks, I'll be sitting there enduring a long weekend of waiting between an MRI Friday and results Monday. But while resignation can mean quitting, I don't have that in mean. It can also mean accepting something undesirable but inevitable. Death falls in that category and so does this MRI but the two may not be related, not now, perhaps not ever. Groucho Marx once joked, "Please accept my resignation. I don't care to belong to any club that will accept me as a member." I'll join him in that and utilize the next two weeks for upbeat energy and constant motion. If death is coming anytime soon, it will be more along the lines of Dickinson that "Because I could not stop for death, it kindly stopped for me." But I hope that neither of us is stopping for the other anytime soon.

Rather, I want to believe that in the next two weeks as Kiana is out of school already and passed 6th grade with straight A's that the focus will be that she's already cooked and asked to go the library. It will be that one of those events was all the family and a friend winning a race yesterday followed by a meal and dessert. We race against each other as part of different relay teams tomorrow. Next weekend Elaine and I do a cancer ride side by side. We're going to another comedy show on Thursday. All 3 of us and the new ARC board will all be doing the Moonlight Margarita Run the day before the MRI. We'll do art projects and video games and board games and other ways to say I love you and this is a method to show I enjoy life better with your company. So yes, there is a long weekend between an MRI and it's result I dare dream that with these friends and loved ones, neither the two weeks nor the weekend in between, I won't be bothered and maybe won't even notice.
Posted by iramjleon at 9:43 AM