The Optimist Who Doesn't Believe In Tomorrow 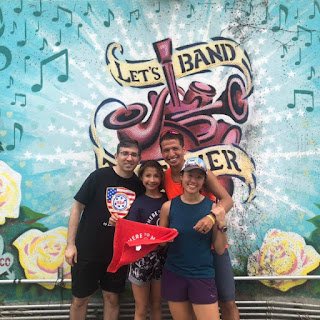 I have an MRI tomorrow. There are cancer patients, warriors, whatever moniker we gravitate towards that call it a simple check up/in. There are others who refer to the process as scanxiety. I long ago decided that if/when this tumor ever grows, I am not doing anymore surgeries or drugs. I have a Do Not Resuscitate  Legal Order as well as a Futile Care one that are solid with Texas laws. So when MRI's come, I'm getting ready to die. I know that sounds morbid but it's true; there's a variety of things I do in the last week or two before imaging that are preparation, all of which there are exactly zero people who know it all, some of which there isn't even one person who knows it. 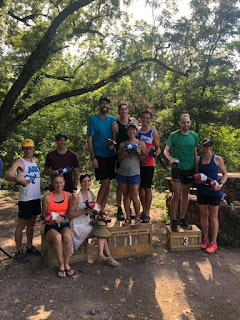 But there are parts that are well known from ancient ago that I've never fully understood why they are commended. A little over 8 years ago, I put off brain cancer surgery to run a marathon and some thought there was something admirable about that or that it was a weapon in my toolbox. It was simply in the event that surgery didn't go well comforting to know that I'd died trying. I have done 6 competitions and or athletic event in the two weeks pre MRI. Every single one was a win and most were a team victory. My wife, my daughter, one of the friends I called from the hospital and I won a Scavenger Hunt. Kiana and I respectively won on triathlon relays with us doing the 10k part, Elaine and I and a couple of friends won a 4 by 5k trail relay. I rode next to Elaine for the longest bike ride of her life, a fundraiser for cancer where she covered 50 miles after taking a bloody fall that bent her handle bars at mile 11.

These events are sometimes interpreted as the way I fight but that's a myth. Why I run so much more than I do certainly is with doctors having sent me a study that showed that long distance runners have a higher survival rate. No, the fact that my highest concentration of events is right around MRI's isn't about that, it's about coping, hoping about just accepting the reality that if there are somethings that I put off later that MRI may well decide to tell me that later is never. If nothing else, it makes never be more delayed in the intensity it takes to arrive. 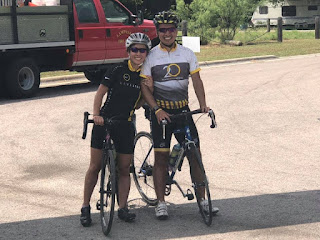 My last entry here was about the two weeks notice and I've been remembering the people who I think were expressing care and kindness when right after I had to put my dog down kept asking me when I was getting another dog. It struck me as odd period but the number of people who asked it in the first two weeks was very disconcerting for me. I joked around with our wedding officiant that if I died soon to keep those people away from asking Elaine when she was getting another husband. With a twinkle in his eye, he said all right I'll keep them away from her for two weeks.

I realize that some of my way of living has panned out well. I am still standing here a few years later and I had lunch with a friend this week who is doing his first marathon between my MRI and the results in the exact marathon I recommended in Seattle. I want that image in my head. I've been raising Kiana to be very independent, something I exaggerated in my parenting style presuming I wouldn't be around. Last week she made us dinner on Wednesday, lunch on Thursday and breakfast on Friday. Wanting to leave her with as many resources as possible, I don't owe anyone any money.  I took her out on Tuesday night to her first driving experience around Karts at a race track. I did one on my own, she did a jr one on her own and then we did a double together in pouring rain. That somehow was the biggest heat and we won it. Turns out living like you're dying has it's plus sides. I've not become magically more affectionate or sweet but I feel all emotions with conviction and honesty, sometimes to my detriment, sometimes to my enjoyment, sometimes those same things to others. I apologize, as neccessary, accordingly. 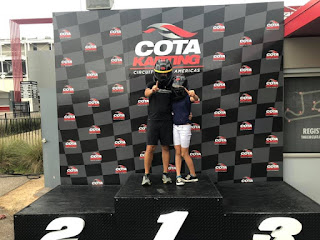 Oddly enough, Kiana was asked to be part of a study about memory and she has her first MRI almost immediately after I do to see how memory develops at the University of Texas. I don't know if it's ironic or appropriate that she's part of a study that is about how the brain develops memory shortly after I am scanned to see if mine is being worn away.

I am not assuming anything will go completely right or wrong tomorrow. Theoretically I suppose it's already gone either way but I've played enough poker hands to know that you play the odds but those don't always pan out but they usually do. Statistically speaking, my odds of making 40 were low and yet I'm about two months from my 39th birthday. I've never fully decided whether I believe that means I've pushed my luck far enough or if luck has been on my side for too long. I know there are people who want to give credence to good vibes or deities about it all and I can respect that but I have zero doubts people better than me have fallen to this disease with less time so I don't have the confidence (arrogance?) to say that it's been a clean decision made in my favor. 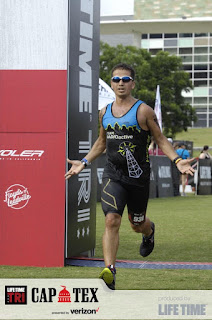 We'll see how tomorrow's test results show up on Monday. It will be a long weekend. But a good piece of advice that a friend from Livestrong, Tom, gave me early into this cancer thing was how you get to finish lines. If you look at race pictures, too many of our OCD run crew that want to know our exact pace or time look down at the watch the moment the race is done, a measurement of effort and competition. He suggested to not do that, to look up, to smile, to make that the focus of the race. I heed that advice often in my races, certainly in the most recent ones. So in my most recent race, I never even checked my results just ran hard till the finish line and ran across smiling and defiant. We'll see whether tomorrow is just a split marker or where the final clock is starting but believe you me, I won't be looking down at a watch but looking up well past the finish line.
Posted by iramjleon at 11:18 AM