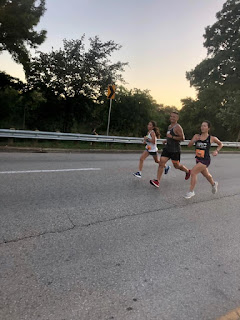 Shy of when the blog first began a couple of months after my diagnosis, I think this is the longest time I've ever taken to write out my thoughts post medical appointment results. The short version of that is the MRI results were stable. I know that some patients expect that but to me I am always genuinely and pleasantly surprised when that's the result. It's like I'm nervous at every start line. I have not achieved the zen status of people who have passions and possibilities and it doesn't phase them. However, the shock was at the end of the medical appointment when the doctor said, well I'll see you next year. NEXT YEAR! It's literally blowing my mind that my brain cancer is stable enough to where we're moving to annual appointments. I didn't think I'd be here period much less stable enough to where I'd ever hear that.

I guess I should step back to the events between the last blog and this to properly remember this momentous occasion or perhaps it was just the occasion of many moments. The night before the MRI we had a race I've done for 6 or 7 years running. I've placed in the top 10 each time I've done it alone but last year and this year I was running with Kiana. Kiana and Elaine are getting closer to each others speed and so we ended up running it all side by side for almost the entire thing. People kept cheering 'fastest family in town' apparently independently. I was smiling internally and externally with the awareness that like friendships of mine I may be running next to someone but in the end I'm trying to beat you. Kiana would run her fastest 5k out there in 20.11, Elaine her second fastest in 20.14 and I was in between them. But it really was the first time that it was a family affair for 90% of a race. I don't know whether or not that will ever happen again but the picture above is now my screen saver on my phone and my favorite race ever. Perhaps, this is why I live on hope because I know that the line "my favorite race ever" has been written in this blog three times alone this year.  The person who took that picture, Jen, the spectator who caught the unstaged moment was someone who was there long ago helping me find the right shoes when I was still pushing a stroller and telling me to be opening up for love. I believe the sentiment that the arc of the moral universe is long and bends towards justice but I believe it does so kindly. Every once in a while we get lucky and it comes full circle.

The next day would be the MRI and despite the thankfulness of the company the night before, I would go do three separate workouts at 6:30 AM, 9:30 AM, noon and then showered before going to be stuck in a tube. I was exhausted enough to where I slept through both the contrast and non contrast section. But before and after, the spectators of my MRI, the technicians were very kind and remembered all kinds of details about our dialogues before. They asked how marriage was treating me, how running was going. Impressed with their attention to detail, I inquired how long they'd been there and one of the technicians had been in that facility 19 years. She would bring up that it was time for ESPN to come back and do a follow up on how the story keeps getting better. I laughed that off. It's like when people have suggested I write a book, my response has been "He put one foot in front of the other. The end." The best comeback a friend ever said to that was like well you don't need to write a book but be aware that you're nowhere near the end.

From there we went to Kiana's MRI for the memory study. Long ago I gave up taking MRI CD's home, trying to over interpret them but we took home a picture of Kiana's brain. Like all aspects of her life, hers looks better. We'd spend the rest of the weekend being spectators. We went to the NCAA Track and Field Championships where there were several photo finishes, some collegiate records and Kiana getting to see what runners at the highest academic level can do. We went to go see the Austin Civic Orchestra do a concert in the park. That was the prevailing central theme in my mind, that while mere coincidence, while waiting for MRI results I was spectating things more than usual. There were still runs with Elaine, with Kiana, with Kiana and Elaine. Whether active participation or spectating, I believe in shared experiences. But spectating is not my favorite thing. While I have teams I supposedly cheer for in every sport, the only one I'm really a fan of is the Cowboys as I watch their regular season games and every one else I keep track of but only watch if they make the post season. Siting back and watching is difficult for me. I hear about home court advantage due to cheering etc but ultimately I want to be out there being part of the action. Perhaps, this is why we offer thoughts and prayers and good vibes in certain situations, dreaming our most positive energy can be channeled for those we support as spectators. 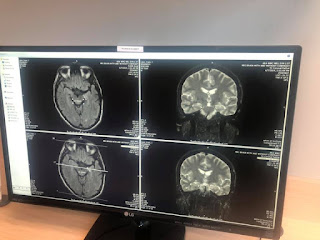 I ran again the morning of the appointment and both Kiana and Elaine came with me. The doctor commented on my weight loss since marriage (hey when you've got a decade on your wife...). We did some of the standard dexterity and memory tests. My heart rate is still very low. When he said that about annual appointments, I was floored and asked if maybe I'm getting to that age to where I should be seeing a regular doctor. He responded by looking at Elaine and saying, "I didn't start going till my wife said I had to" and asked her if she thought I should go. Even a guy with a medical degree in Neuro oncology realizes the real way the universe works.

I'm still floored. While I've run a lot this week, they've been relatively easy compared to what I do. For my one hard workout all week, I did something I haven't done all year except in races, ran with fast beat music to actually push the tempo with some help. It took me a couple of nights to sleep well because when it was over 2 years without a single month without a medical appointment, 3 years without driving and the statistics that I've outlived the median and that the birthday was improbable I'd achieve, 40 is a little over a year away just keeps flooring me. As I sat late at night, spectating my beautiful wife asleep, and I kept thinking wow, in 2020 if all goes right, I'll only have 1 medical appointment. Then the thought came and I realize no wait that will be true of 2019 too.

I was flooded with emotions of thankfulness and a variety of thoughts from the profound to the silly. One was the fact that a few years ago, once the medical appointments eased up some, I finally got some neglected dental work done thinking well I might need these teeth longer than expected. I was glad I did that because I was now smiling from ear to ear.

People have asked if this doesn't make me worry more; that for them they find the reassurance in being told things are not back or that they're stable more frequently. While I see that perspective, I don't share it. I've told my doctors all along that the less I see them, the more I like them. For better or worse, I only worry about it when the screening is coming up. I talked to Kiana about how I genuinely didn't think I'd be here and I pointed out to her that some of the brain cancer patients she'd met at events and races, one of which I pushed in an adult stroller, one of which beat me at another race had both passed, that I don't know why I'm still here with a complicated disease. Still, I'm not changing the running or the lifestyle that got me here because if it ain't broke don't fix it. There have been suggestions about this documentary that if you take out this dental filling or if you eat this herb that the tumor will disappear. Or if you eat this natural supplement you can stop taking the medication you're on. I appreciate the passion or desire to have life have less side effects but to me the biggest side effect of all this is that I'm still alive and perhaps, I settle too easily but I'll take it.

So now, for at least a year, the images I have more concerned with are the ones that Kiana decides to put up when she opens up a social media account in a few months when it's officially allowed at 13. My biggest worries isn't whether my tumor is growing but how she handles the awkward moments of junior high and growing up. It isn't whether my brain is my friend or my enemy but its every one who thinks of becoming her boyfriend realizing I'm their enemy. I am no longer concerned with what is projected onto a computer screen but what brilliant reflected I'm supposed to say when my wife takes me to see that deep movie that isn't just about cool action heroes. We've both been doing orange theory where it's about raising your heart rate, something they struggle getting with me and my resting heart rate being 42. She made a joke about how they can't get it up on me. I've made jokes about biological issues since this cancer started; I appreciate Elaine and I being able to see those as less relevant than standard biological jokes.

A few friends and I are doing active things Saturday and we're hosting a game night Saturday night. Then, Kiana and I are headed to brunch and then Hamilton Sunday for Father's day. The details of life are wonderful and I guess I'll walk in and out of there singing the same thing I've been reflecting since the MRI results:

Posted by iramjleon at 8:01 AM