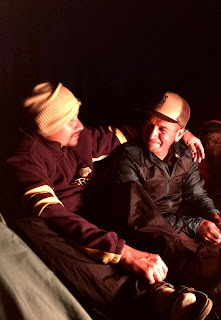 patients and their families. It apparently happens every two years which means I could have attended a few times now but it had never gotten on my radar. I say intense because of several reasons. There was emotional overwhelming because some of the people who are big advocates there shared early on how lucky I was still to be alive. There were several patients there some with staples and/or stitches still in their head. There were some brilliant doctors. There were stories, some with little I could relate to outside of the cancer experience and some where parts of our lives seemed like part of the same poem. There were others I thought maybe I could show them poems you read further down the line that even though I was a first time participant, the brain tumor experience felt more like I was alumni.

I suppose I was already prepared for this to be emotionally overwhelming as I was packing I wore my irreverent shirts that came along the cancer journey. I wore the seizure one of when my language functions freeze with the caption "sometimes I stop to think and I forget to start again," my going into brain surgery one (it's not rocket surgery) and my leaving one (gave him a piece of my mind) each day. The tumor hasn't faded but has also stayed stable and turns out the humor coping mechanism still matches. Hope I've always declared is my 4 letter word and the conference was titled "Together in Hope." 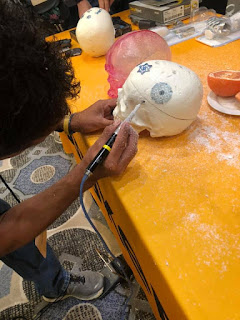 There were stories of cold hard facts about longevity and prognosis, sometimes spelled out but often read between the lines that for a lot of these 120+ different types of tumor there is no known cause and no known cure. There was the advancement in science, some of which I've been privy to as it's developed about the gene mutations that now help predict things better. There was more coverage than I'd ever seen about neuropsychological evaluations and cognitive impairment and function. There was actually a spelled out line by line item of somethings that seem to increase the median survival rate for participants divided into a variety of categories about emotion, diet, exercise, mental and spiritual (I kid you not without knowing them I was doing all but one on the list; the intuitive force is unusually strong with me). There were general presentations, some breakout sessions and one of the ones I picked out was how to read an MRI better; I haven't taken a CD home in years and I don't know if I'm more or less tempted to do so after doing that. I even got to practice drilling into a skull with the tool that was used on me (on a fake skull) and doing brain surgery with a tool though I'm not sure whether or not that was the one they used one me (on a grapefruit)

But invariably my favorite part was the human part; the groups where we sat and traded stories. It's not the first I've sat in groups like that but for a guy who is as obnoxiously chatty as me, I usually sit through and don't say anything. I've got this place where the story has poured out plenty by hiding in public and I get to give it in public places (though that's got a little more polish) but in these circumstances I listen and listen and listen. There were groups for people with children, young adult cancer survivors and gender specific groups. I primarily focused on the mens one but was reticent enough to share to where I actually got nicknamed "the quiet one." Listening to people who also shared jobs lost, marriages broken, someone else who had become a single father, seizure stories, beating the odds stories, clinical trial stories and invariably friends they'd made along the way who were no longer on the path because their tumor grew and took their life just made me more attentive and more quiet. There were people there who genuinely surprised me with how much they valued not dying no matter what the quality of life; I don't share that value but it was good to hear it.

There was another element that was a focal point for me; I was one of the few people who had come there alone. Most of the guys younger had come with their mother; only one with his wife. Most of the guys around my age or older had come with their wives or significant other. There was a disproportionate number of men in this group. While brain cancer is disproportionately male, it isn't as much as it was at that conference. A far bigger percentage of the women who had come were there on their own. I didn't know what all that meant and I'll let everyone draw their own conclusions but for me I wondered if maybe you know I should have brought one of the meaningful people in my life... I didn't give it much immediate thought as it wasn't correctable at that point but it did stick out.

But it kept reflecting because another point stuck out. As people told stories organically, they would praise their doctors or medical teams a lot or tell points about their jobs or their circumstances. The reactions would be like "I'm sorry" or "what a great decision/outcome" or "that is a great doctor." It was not intentional but somehow my stories always ended up revolving around the ways people helped me, from walking me back into hospitals, running with me, driving me, flying out to Duke, helping with the medical bills. The response I got to a variety of stories almost word for word was "You have such great friends." The fact that I'd put off brain surgery to run a marathon came up but it's speed did not nor did the fact that I won a marathon pushing a stroller. It was refreshing to have it be where I was just a runner who ran to escape from cancer not a cancer guy who ran. And this, this was made possible my friends.

Appropriately enough, the conference was about that. I had dinner with a friend on Friday after the first day who has his own brain issues. I was staying and hanging out at a friend's house who had been part of the fundraising efforts from the Ultimate crowd. I got up and ran 20 miles with a friend. Saturday night I had dinner with a relatively new friend from the Wyoming crowd that when someone asked if she was my wife who I'd been talking about pointed out that I was old enough to be her father (she's 23, I'm 38...).

Still, hanging with her while thinking about the you have such good friends remark made me think about a conversation I overheard while in Wyoming. People were sharing some break up stories that coincided/overlapped/might have contributed to while cancer. One was relatively recent with the person they were breaking up literally moving out while they were backpacking with us. It ended up in a conversation about how at least a couple of them had kept their ex as their emergency contact. I didn't say a word but they explained that in that scenario that would be the person who knew the most. They however genuinely believed that their emergency contact was not and perhaps would never again be a regular part of their life.

My emergency contacts and executors of my will have always been two friends; part of that is they are literally people with lots of financial information from their degrees (MBA, Ph'D in Math) but somehow I want to believe that their being close but not as close they could have an easier time making objective decisions or respecting my wishes. This was something that was shared at the conference as being clear with people. 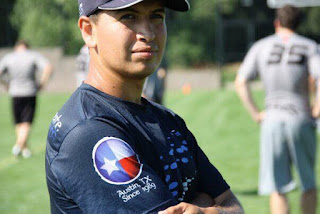 Nonetheless, the thought I left with was that if the story of my life is "you have such good friends," that's a life I'm rather pleased with. Today started with an old friend sending me a picture from exactly 10 years ago when we were playing ultimate in Boulder. I was a few days from 29 then and I'm now a few days from 39 and I like to think I haven't changed much in looks but a good chunk of the guys I played with are still my friends. Every single friend I called from the hospital is still in my life.

On the better part of 3 hours on the ride home from Houston to Austin when there was cell phone coverage, I spent the vast majority of the ride on phone calls. Before brain surgery, I had gone on this tour over the places I lived and said hello to people from stages in life. I suppose like a tour of life or a funeral, it was the poignant moments and I wanted at least one more. For better or worse since then, the relationships that matter to more now are the consistent ones. Life doesn't always give you too many luxuries; I'm not naive but the friend who I ran 20 miles with we once had a conversation about when have you made enough money and he cited a study about how once you've got the basics covered and enough for a few frills, life satisfaction doesn't actually go up in proportion to huge wages. It stays all but flat but the improvements to life come from how many connections do you have that you can call at 2:00 in the morning when something goes wrong. I am pretty happy with that list but I didn't want to save it till 2 in the morning and spent from 12-3:30 or so just chatting about sports and the weather and... just things good friends talk about and saying thank you for the things from so long ago but also for how we hung out relatively recently. Any of those calls could be emergency contacts but I was glad they were just regular contacts, all people I had seen relatively recently and would see again soon. There's plenty of people I love to party with that I'll have a shot with late in the night but it's the people you could share the silence with, perhaps with a glass to share in the all but quiet, thats an A-frame picture right there no?

I'll join some friends for a run in the morning but I still may share a glass or two tonight. There's still plenty about my brain tumor that no matter how much hope still lies in front of us, there are lots of answers where we don't even know the question. I don't know or where when I'll have my next emergency but I'll keep trying to never pass up the opportunity for good contact.

Posted by iramjleon at 3:47 PM