We all have ways to explain the universe. Many of us find our own ways adequate enough to at least get some sleep at night. But I have long struggled with the perception, projection of the unmoved mover. Aristotle started it trying to make sense of the simple laws of motion, that somethings move us but where were they moved from and ultimately concluding that a logical reasoning deduced an originator, a god/God that somehow was exempt.

I see this in my cancer world ("my cancer world" ... I wish I could explain that better) as we survivors deal with our mortality. Humans, the vast majority of us, are in denial of it; something I've seen on deathbeds. The unmoved mover is sometimes death itself, something that the fear and stakes we put on it doesn't seem to be with the force itself, or is life the force. Others have played with a concept that perhaps it was all one long cycle and therefore needed to be no originator; I've tried to never accept that as that's literally circular reasoning.

Why do we let the inevitable like death mess with us so much? And when we're truly honest for most of us is the thought of our own deaths or the thought of others harder to take? Why are we so often moved less by so much of life? I have turned 39 since the last time I wrote here, which now puts me less than 1 year away from the age, 40, that statistically I was not likely to reach. I avoid hubris and I don't want to be Icarus burned especially in the Texas summer sun but the even though the sun is also a star, the night ones seem closer now, a little brighter.

I've been doing a few more things in the cancer world perhaps because I'm a little less scared of it, some in groups, some one on one. While I was in Wyoming with TNT, I made a decision to make a conscious set of thoughts on a particular point in a familiar route that I've done at least weekly since returning. Tonight I am in Pocatello Idaho just having finished the speech of my favorite start line which like my favorite race is a simple answer, "the next one." It's the first marathon that invited me to speak after all the media and there was I talking about the race I won etc, and how I was focused to make sure that I die trying. But when I came the first time I came alone with no ability to drive. This time I came with my wife and I had friends here from back then and since then from other places. I took a rental car to the state fair the race director had been kind enough to take me to last time. I drove to a part of town to just walk around. I gave a speech where I didn't focus on my times or my wins but on just realizing that continuing to get to start lines is why it matters.

The last time I was in Pocatello I would qualify for Boston, PR. I didn't sleep well the night before. In fact I got up and wrote half this blog entry in the middle of the night to try to clear my head. Shall we call it progress that I'm writing this one before the race even starts because I just shared a conversation that for the vast majority of us, in regards to races, the journey to the start line often matters more than the journey from the start to the finish line of the race itself? I spend more time in my speech talking about why I put off brain surgery to run a marathon than I do talking about the 26.2 miles, I spend more time about why and how my mom started running, about how and why I started running with Kiana in a stroller than I do about the Gusher Marathon win. So suffice it to say that while there's a bib on me and my body is physically capable I'll always be competing, I'll always be trying to PR but right now I can't imagine ever writing about a finishing time in here and I'm going to focus on the start line. It feels particularly appropriate here because I found out after the speech that while the start line remains the same, the path to the finish line is not.

I do not think there are any unmoved movers, at least not any healthy ones. Death is an unmoved mover but death is the absence of light just as darkness is the absence of light. Its not it's own entity. I think even the creator of the universe has to be a moved mover because how could he create the beauty of life without being moved? Perhaps I'm romanticizing it too much but if someone messes with me and the connection isn't moving them back... that's not a dynamic I want to be a part of. I took pictures of some clouds from the plane coming in and thought that I've looked at clouds from both sides now from give and take and still somehow it's cloud's illusions I recall. 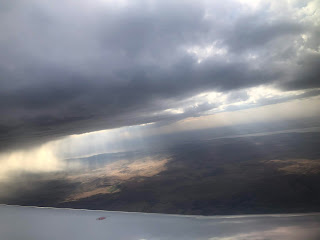 I have only ran 2 marathons in the last 3 years, this will be the first time since 2015 that I run 2 in one year because somehow I've never entirely shaken being the cancer guy that runs marathons but I think my own speech today may have moved me to  just focus on the start line and that retirement already came when I broke 3 but that retirement just means on the clock. So at least for tomorrow's marathon, no matter how good or how bad it goes, in this blog which is the last thing I intend to read before I die, the place where the most important things go either straight written out or have nods that I hope trigger the right confessions into my memory, whatever time I hit tomorrow will never ever be written out. Every marathon has a theme song I listen to as I prepare and this time it's the one from Hamilton Hurricane due to a couple of lines:

I'll write my way out Overwhelm them with honesty

And the honesty is that what matters about tomorrow's race is that I'm still here, still somehow getting invited to share a story with strangers and with friends and more importantly still getting to live it.
Appropriately enough shortly after finishing a speech about the start line, I head to Wyoming immediately after the race where the exercise that conscious thinking came into view with a little bit of good luck. I've been running marathons for nearly a decade now, just a little longer than I've had cancer but in dealing with both, with life, with love, I'm going to try to take it as fine wine and let it improve with age, take it in and let it move me.
Posted by iramjleon at 7:11 PM