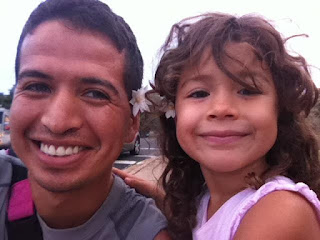 Well, my case is curious enough to be turned into a house episode. Next Thursday the new neuro oncologist, who has finally done everything that I wished any doctor had done, has compiled all records and will be presenting it to 20 doctors, neurosurgeon, oncologist, neurologists and general physicians called the brain tumor board and think about some ideas. The official verdict of how long they aren’t going to let me drive comes in that day. The great irony is that it came the day after an interview which went well enough but they needed me to able to drive which to me would be an ideal job.

Showing something or other, some would call it independence, others would call it stubborn pride, I have not been taking the rides but rather, for anything not involving Kiana, I have been biking all over town. Saturday, I biked 10 miles to the marathon group I’m training then ran 14 to one of the highest points in Austin. It was supposed to be 13 but I wanted to go to the top and was grateful that a few people came with me. I biked home again.

I was worried about a carless weekend with Kiana but it turns out that a rainy weekend was an indoor one anyway and that this kid’s imagination is wild. There was a bit of sunshine and we went outside and drew on the sidewalk. Later Sunday it was raining pretty hard and Kiana and I were going to run about 8 miles in the stroller but since it was raining I decided to cut it to 4. She complained at the end that we were supposed to go longer and I pointed out that it was raining and she said, that’s what this hood is for. Man I love that kid.
On Tuesday, I was trying to figure out what a life without this car would look like. I had a volunteer appointment at the dispute resolution center where I’m a mediator. I hadn’t done once since this started and just to make sure that I got the details right, I made extensive notes and the other mediator thought that it was heated enough to where we weren’t going to reach a conclusion that satisfied both parties. In the end, we did and both parties rated us as excellent and that they were very satisfied.

From there I went to a medical appointment, from there I went to the Livestrong counseling classes. I read to her the entry from here about avoiding cancer, about how I never want to be someone who sucks up resources without giving anything back and she kept wanting to point out that I was far from doing that. I’m not sure I believe that. From there I stopped at a running store and picked up new running shoes since the ones I’ve had were well beyond worn out and from there I went and did 4.5 miles of speed work on a track with my group. I biked home and the day had gone great in my book, I literally was standing up on the bike pumping my fist… when I arrived home.

And there in the middle of my driveway was Kiana’s mother and her boyfriend. Now they’ve done drop off tons of times but he’s always been whatever enough to stay in his car. Last summer when this was all happening I let him know to never be on my property. There are lines in the sand, and in this case, Texas law, that have to be sacred enough to be respected. I told him to get off my property and he said to make him and while in my entire life, I’ve never started a fight, and I hadn’t gotten into a physical one since high school, I put the bike down and shoved him off my property. So I did and it wasn’t much of a hassle really, some pushing back and forth and me putting him in a headlock  where we went up against his sideview mirror and it broke. At that point, Kiana yelled “Go, daddy, go, mommy left us.” At that point I snapped back into reality but I had him in a headlock…so it was awkward. My ex pushed me away and told me to get off him and at some level frankly I was glad that I didn’t need a girl to protect me from another guy. I know some people who read this will be disappointed and I sort of get that but I don’t know that I have any apologies for taking someone off my driveway when they’ve been told to not be on there before. In the end the police was called (by me), and they definitely picked up that I was a strong personality because I am. They said he wanted me to pay for the mirror and I said there was a 0% chance in hell I was doing that without a court order. He received a criminal trespass warning that’s now part of official police records and hopefully he understands there are lines you can’t cross. Someone reprimanded me for doing that in front of Kiana… and I for the first time ever in my life reprimanded her for something I had no problem with her saying… but yeah there are lines that are too far. You can sit there and lie to me while you’re having an affair with my wife and putting me and my parents up at your parents house during brain cancer surgery but for the first time in my life, I understood Texas Law of why your own place is sacred and there are lines that if anyone ever crosses with Kiana, I’m okay with her defending herself.

Some Texas laws seem overreactive and are making my life milder by not letting me drive. Some Texas laws are from the old west and it says something that the evening ended up with me receiving nothing and him receiving a notice from the police saying if he was ever here again, he’d be arrested.

I am about to bike to Livestrong’s cancer and transitions class, a men only class about dealing with some of the losses because let’s be frank some of those mess with machismo ego. From there, I am cycling back home where I’ve joined Kiana’s parent teacher association and from there I’m cycling to do a 5 mile workout with my group. I’ve never started a fight, and the Livestrong counselor tells me I seem incredibly adaptive. I don’t know, I’m exhausted at some level emotionally but I am going to guard  my lines and help back in whatever ways I know how. Some of this has been a lonely journey but I am still grateful that even most of those parts have not been alone.
Posted by iramjleon at 7:19 AM