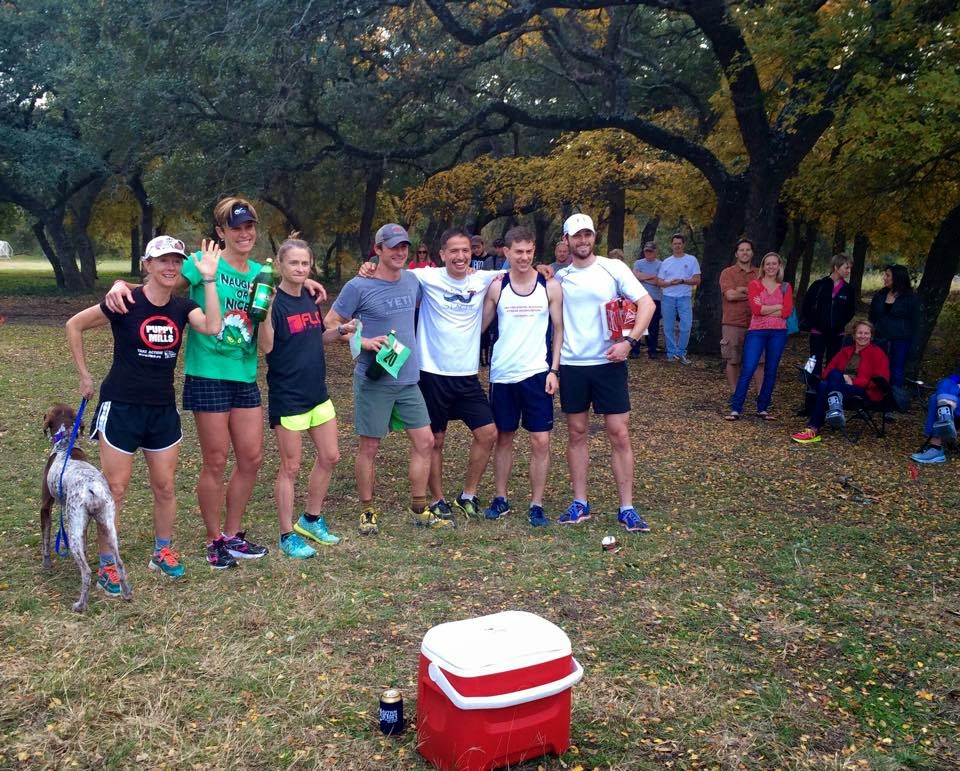 November in the end was a pretty good racing month. I did not win the beer mile three years running, took second in it in 2014. While it earned me one, I had  to pass up the free entry to the world championships for the same reason I've passed up some other invites I'm not going to let races be an interruption to time with Kiana (though you gotta admit, "man does beer mile with a stroller" might also make headlines... though probably not good ones, speaking of headlines for those who keep track of the media stuff, ESPN will be following me around this weekend for events for something that will air later) But in the end there were 5 different distances in 4 different distances with 3 podium places with 2 personal best is 1 month of November racing... but no partridge in a pear tree.

I've actually done 4 races in one month two other times but that goes down as the most separate races in one month. When I do things like this people have called me two things that I think are compliments, a machine and a beast. Last name being Leon and having taken on the Spartan race by the same name, the beast one is kind of fun but I never quite knew what to do with the machine one. Maybe it's because I've never had great associations with machines... I'm not a complete idiot and know many (most?) are designed and help man be more productive or at least measure how productive they are being. In the best case scenario, it won't be man vs machine terminator style but man and machine finding a way to help each other. I mean look at all the cute pictures I get of Kiana with my phone!

It's funny I have so many friends who have a mild interest to an obsessive compulsive disorder with simple machines that measure their bodily function for running or calorie burning or step taking or heart rate. I used to keep track of that stuff more before my medical appointments but now I feel like I get poked, prodded and measured enough by machine that I only use a running watch 3 or 4 times a week tops and use nothing else. And so I'm just four days away from stepping into a machine that tells me if my tumor has grown.

People still ask why I've gone to almost all MRI's alone for the last four years. While I have friends accompany to many appointments for many reasons but one of them is certainly because they might focus better on what the doctor is saying, it's not like someone is going to crawl into the MRI with me. There are people who are bothered by the noise and it is very loud but that's never bothered me... It's the fact that the machine is an incarnation of the nightmare. I couldn't remember I had a seizure, just heard that story inside of ambulance. It was an MRI that would tell me I likely had brain cancer and that's the test most frequently run test, the one after ambulance rides, before biopsies, before brain surgeries and then at randomly assigned intervals, I mean logically thought out times based on the lunar and solar cycle. And frankly, if I am going to invite anyone to sit around while I have a nightmare, I'd rather it be someone who is someone I'm relieved to fall asleep next to the night before the nightmare and excited to wake up to the day after. There was a girl who if I've gotten anything close to experiencing love with that was invited to a recent MRI but we didn't make it through the medical appointment day together... I'm more than willing to take most of the responsibility for that since it's when this stuff comes up that I'm most anxious and therefore distant because of the fear of damaging someone with my own damaged brain. Simply put when it was all said and done realizing there was no one at that level of attachment made that MRI easier than most. It makes me wonder if sometimes the only way to tell if life and love are going in the right direction is how much you keep going with each other...

The neuropsychological tests that I used to work on fairly faithfully at home I do a lot more rarely over the last couple of months finally accepting what good doctors said that the language/memory etc functions are as good as they're going to get, at least all I can help to do them by myself. So the MRI is the big test and one you can't study for. Friends ask how I feel and I try to smile without being condescending because we all want to believe that everything that could go wrong gets felt in advance but I've met too many cancer patients period and certainly brain ones where that's not true in any form shape or fashion and one of them was me. The friend I'd mentioned in here who was the first person I'd met who had the same diagnosis as me stage 2 diffuse astrocytoma, she was in for a "routine" MRI and now has learned it's gone from  stage 2 to stage 4. In her academic years, she was a nerdy student like me and joked about how they ruined grade 4 for her since she'd always associated it with the kind of grades she used to make 4.0 rather than grade 4 cancer (These medical people ruined 4 for her, they better find no way to ruin the number 8!). I've met other cancer patients who on their way out say to those of us still stable don't worry this won't be you. Heck, if it says anything about her character this friend almost didn't let me know because she didn't want to worry me extra about my MRI and she seemed more concerned for her husband and her dog than for herself (they still one of the most romantic stories I've ever heard, where he proposed shortly after finding out she had cancer in the snow and are heading to six years now). Other cancer patients understandably try to tell me that I shouldn't worry that it will be me but and while I know there's no way to do so but given the choice, I'd rather it be me than people like who her who seem capable of so much more good.

Still, not long after the latest treatment my friend was on a biking machine working out. Another brain cancer patient friend was on an elliptical machine shortly after surgery. And a third was doing 17 miles on a treadmill (17 miles!, I couldn't resist calling him a machine on a machine)... I'm not a working out indoors kind of guy but I still  did all 3 of those machines after surgery though not too intensely because for safety/seizure reasons I was not allowed to workout outside and if anything goes wrong there, you're collapsing in a relatively safe place. My brother tracked down a video here of me shortly after surgery (I in return tracked down a picture of us as little kids) barely moving when I'd just qualified for Boston less than two weeks before. It's almost funny how we try to fight what one machine tells us by getting on another one... I don't know if those machines do help or not, or the exercise, at least not with brain cancer survival probabilities but it still helps me besides cancer, away from it for a while.. my grounding by putting one foot in front of the other on the ground.

If nothing else, running has been a reminder that cancer even if kills me didn't dictate too much of my life on the way. It was a blessed coincidence that I was training for a marathon when this started. And putting off brain surgery gave me a coping mechanism almost as good as humor and almost better than sex drugs and rock'n'roll ;). Because I've tried to make the medical appointments revolve around my life, not the other way around. That first surgery, the last time at Duke, a race dictated the appointment not the other way around. Like Frankie said, I did it my way. The last MRI this summer, I actually made it the day after Kiana headed to an extended visit with her mother for two weeks that way if things went wrong I could fall apart on my own. I don't have those type of luxuries during the school year so the test is Friday, the results come Monday and so I'm doing a race next to Kiana on Saturday and one behind her on Sunday and setting up Christmas stuff in between dealing with a rainbow of colors and decorations while wondering about gray matter.


So yeah I'll sit with some ideas about what could go right or wrong this weekend on races and with machines. And even if it makes me keenly aware that some of the happiest moments can also become sad ones when it all goes wrong, you keep going. Someone who read one of the articles of what has been my focus, let's get to 40 and we'll worry from there sent a very kind message about how I wasn't optimistic enough. They wanted to tell me about the power of positive thinking and how that alone would cure my cancer and/or make medical appointments go better. I tried to remind them that I am and always will be an optimist, ahoper of far-flung hopes and a dreamer of improbable dreams. But my dream has never been to beat cancer, it's to wake up each morning and realize that no matter what I'm going to die and to try to get that day a little bit better than before the reality of my mortality became so poignant (But for those who talk about beating the battle against cancer if you want to read a poignant but strongly worded phrasing about why the term the battle against cancer bothers people, read here http://www.mcsweeneys.net/articles/an-open-letter-to-people-who-use-the-battle-metaphor-for-other-people-who-have-the-distinct-displeasure-of-cancer). So maybe I am an optimist and it's not such a far flung hope that a little girl will like the Christmas parties and our first night run ever as we run through a trail of lights (http://austintrailoflights.org/fun-run) or that she enjoy the only race I haven't done with her on a stroller that I did between diagnosis and surgery, the Decker Challenge (and if you look at the elevation profile and wonder why I'm doing it with a stroller, that makes 2 of us http://www.halfmarathons.net/usa_half_marathons_texas_decker_challenge_half_marathon_map.html). And my improbable dream for that race is to do it faster with a stroller than I did it after I got out of the hospital which was a 1:26.

I guess I'm relatively proud of how I am trying to handle this. I cleaned fairly thoroughly yesterday, raked leaves. I had a list of things to do that involved other people that somehow I wanted cleared before my MRI and that's almost entirely done. This isn't a way of not letting it get to you. Whether it be that cute girl who you want to make sure you get to call her for no reason at all, that friend you get to share food with, or that race which you trained hard for which you may or may do well in, or that MRI, I actually want to make sure things get to me. Because in my book, letting it get to you, you know what that’s called? Being alive and it's the best thing there is.  And that's the difference between man and machine. And while on Friday I'll be in a machine, I'll try to handle it like a man.
Posted by iramjleon at 6:27 AM