What the Fates Allow 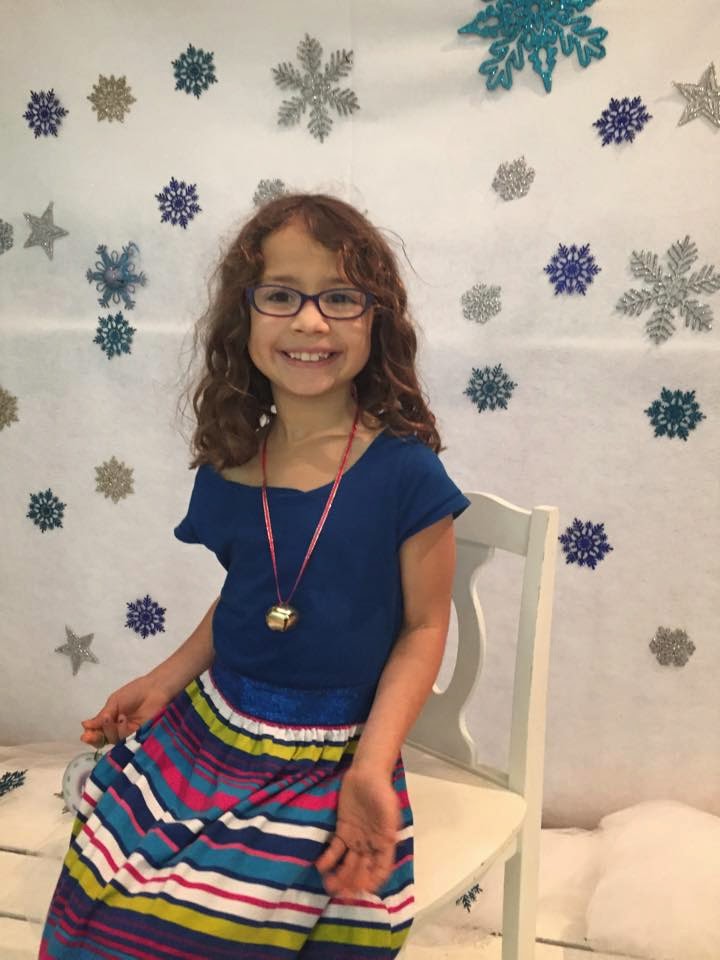 It was almost exactly one year since two MRI's ago but the last one was before any of the Christmas stuff had kicked in for me so somehow I hadn't gotten into my listening to the seasonal music which I usually do after Kiana and I put up the tree. This MRI result appointment was after that and as a good friend called and said please let me know how today goes, A Merry Little Christmas was playing in the background (https://www.youtube.com/watch?v=nZ6yQgBvuoI) and I couldn't help but respond, "hopefully the fates allow us at least a few more years."

I have a more structured what I do before and after races than what I do before and after medical appointments. But I headed out to a run... I was pretty sore from the Decker challenge so I was going to just do an out and back for three miles, maybe 4, seeing how the body felt. Somehow in the middle of the run I remembered that well, I ran 4 miles to celebrate arriving to the 4 year cancer anniversary and I said, I'm trying to get at least five years with this thing so I ran 5 miles listening to more seasonal music...

I've always loved being busy... I am not good at standing still. But I had to cool down some after the race and just kind of sat at pictures. I looked at one of Kiana celebrating having made an ornament from Saturday.  And my friend and roommate Randal had come to the MRI to watch Kiana. While she's regularly seen all of them on CD, this is only the second time she's ever been there for the full MRI. She at first watched and then looked away when the needle was going in and luckily someone caught that moment from the picture. She would be interested in the machine a little bit more but in 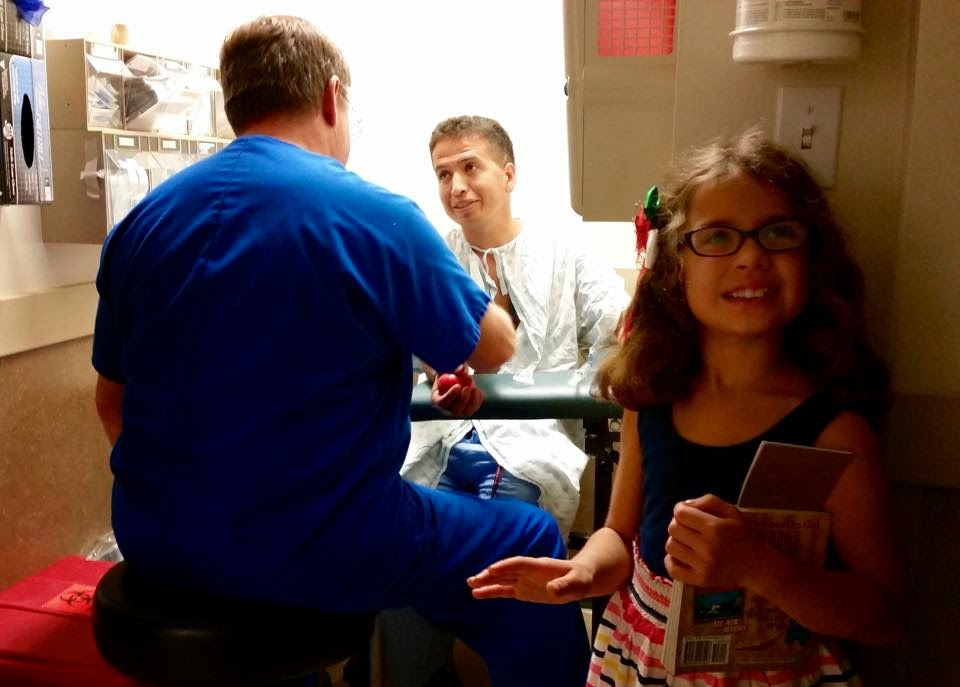 between it all she'd keep going back to reading. We try to make sure we do something extra fun around the appointments she comes to so that while she realizes I have to deal with the hoking and poking, well, that's not what it's all about. I've been criticized by a few people for doing that but I think as much as I've put myself into being part of the community whether it be in fundraisers, Livestrong, races, and media, I want her to have a concept of part of it all. More importantly, if and when the results go bad on an MRI, I want her to have some clue... I don't know...is that bad parenting? (Perhaps the bigger clue of how bad of a parent I am was that for a biography project she had originally chosen Katy Perry but went back to someone similar a few decades earlier, Frida Kahlo whose art has at least lasted longer and made unibrows sexier). 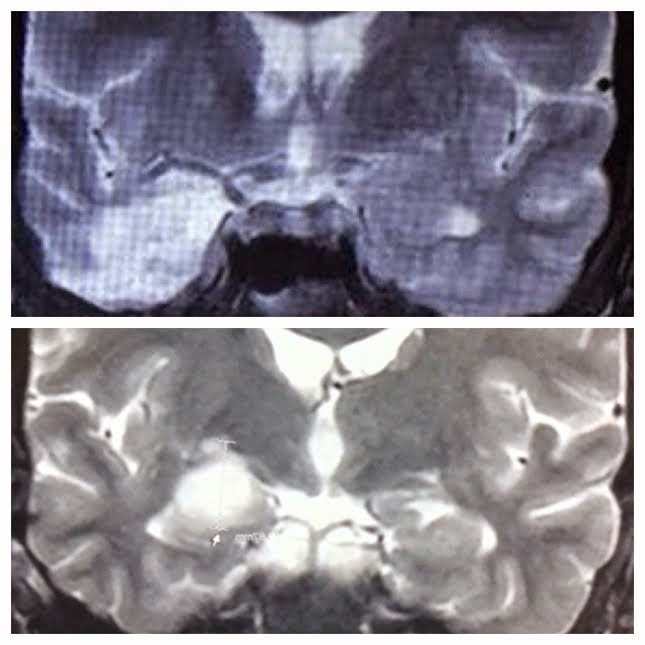 Still, I can't say that this was the sharpest I've ever been pre MRI. I'd spent as I always do way too much time looking at the images between the MRI and the results. However, my habit is the same as what the doctor does to look at the current one and the previous. For some reasons, I couldn't find the recent previous ones and the only one I could track down was one of the pre-surgery. I literally cut and pasted the tumor section on a presurgery one and on a post surgery one, knowing that they couldn't possibly be the same because surgery obviously affects the brain. They looked so different but to me the MRI from Friday the tumor looked so much bigger. 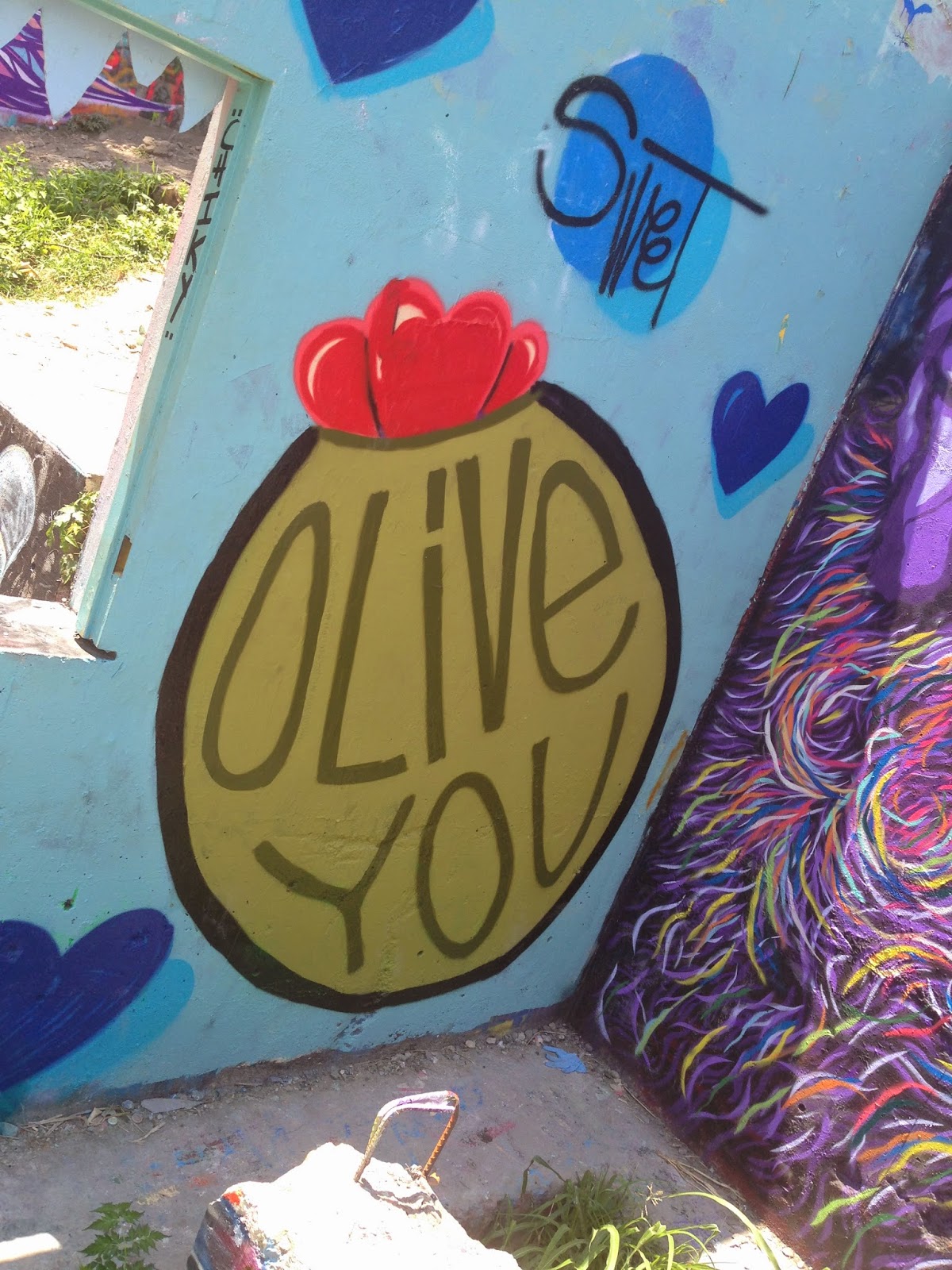 Anyway, on the way to the doctor I made an unexpected visit to an Austin spray paint park where the art regularly comes and goes. It's a place where it's allowed and encouraged but by the nature of the place, perhaps life life, it's temporary no matter how beautiful. It was only my third time to a place I'd never heard of... reminding you that sometimes you find beauty in unexpected places. But also reminding you that no matter how impressive it is, it's not designed to last forever since one of the pieces I saw the first time would be sprayed over by the second time. It was not a branch but an actual olive of love. I went not too long after to see it sprayed painted over. Now in an unplanned stop it was gone altogether and replaced with a whole new set of very different artistic beauty. 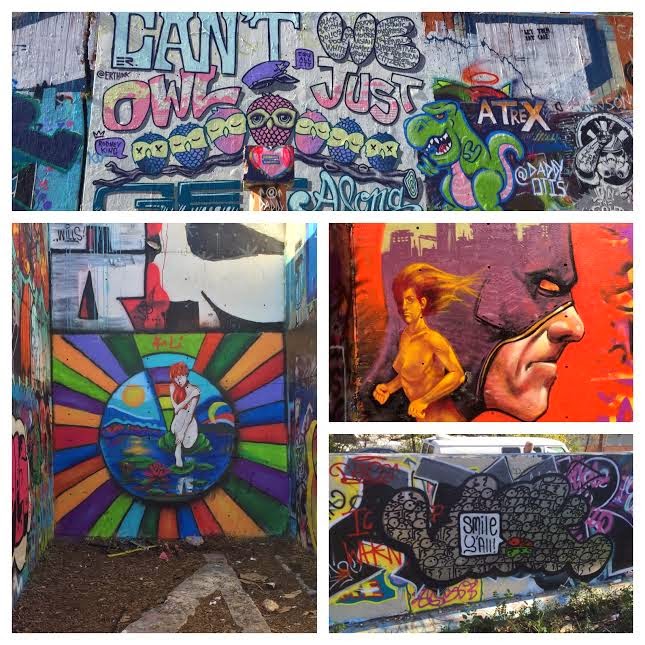 Still when I finally picked up Kiana from school and headed to the appointment it was what was going through my  head. And I hoped the only new thing in my head even as I looked once more at my obvious (to me anyway) not the same as before tumor. The doctor came in and immediately shared that everything was stable. I took him at his word and breathed for the first time in a few days. (I guess I'd been breathing while pounding during running and putting up the Christmas tree with Kiana but I really don't remember that part... must be the bad memory).

We would do the pulse (mid 40's) and the basic tests. He would ask about seizures and I would mention to him the one time since I last saw him where I forgot the meds twice in a row and almost had a seizure but recognized it and headed home. He asked if i was throwing up from the meds (it hadn't happened in three weeks and it's been happening less frequently). It had happened after the MRI as usual (which by the way I have no complaints about because with that metal dye I actually feel better after I throw up rather than sitting there with that feeling) and after the half (though it's debatable why I throw up after races to other people). I told him that I'd ran my fastest mile and marathon since I last saw him so obviously being away from him was good for me. And I reminded him that when he let me start driving again, I'd brought a bowtie to clip on and we took a picture together. I shared that I've grown more sophisticated since then and actually worn bowties twice properly since then and gave him a bowtie for Christmas. He asked if I had any questions and I showed him what I'd been looking at. He thought it was good that I look at them myself while my roommate was in the back shaking his head (I let them both know that Texas law lets me and no one was going to speak for me on that one and it would keep happening). Still, he showed me pre and post surgery MRI's and while there is change what to me was a bigger tumor he explained and compared why it was scar tissue from the surgery not tumor growth.

The next MRI was referred to at the office but the next appointment was set for June 1st and by 10 am this morning I'd set the MRI for May 31st that way, so that (I hope and dream) this is something I don't have to think about as much for a while.  In the end, I high fived Kiana and continued breather. My rooommate delivered an awesome Christmas present when we got home and said he was going to deliver it after the MRI no matter how the results and that I should go out after Kiana got to bed (I did to a fun night where let's just say leave it at that the results were absolutely nowhere near the best part of the day including catching another part of Austin I never had). While I'll be running plenty between now and then, I'm thankful that for right now our problems will be miles away.We went out for dinner and homework and reading as a way of hanging our shining star upon the highest bow. So I'm thankful for what the fates allowed. And while they do, I'll smile and muddle through somehow. But I imagine we'll have ourselves a Merry Little Christmas now.
Posted by iramjleon at 9:10 AM