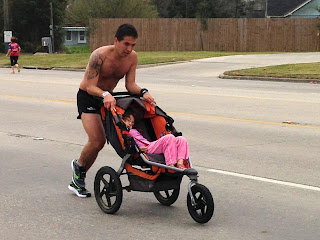 When you put off brain cancer surgery to run the 2011 Livestrong marathon, you never get to live it down… but I’ve ran 3 marathons since then and wondered many times why none of them have gone anywhere near as well… 9 minutes slower in 2012 with an ambulance wake up call less than 2 weeks later, nearly an hour slower with the 2012 Boston weather being the second hottest one in 112 year history, 2 minutes slower in 2013 vomiting 4 times on the course and 4 times after the finish…  I’ve gotten faster times in every distance why couldn't I hold pace over the marathon distance? My brain maybe screwed up but it finally found the reason.
After Austin, where I was trying to get some aggressive goals, I accepted that if you have 2 ipods give out and throw up all over the course, it’s probably going to be tough to achieve it and moved into 5k mode since my next trip to Duke revolves around their annual 5k. But there were 2 of my running group who were looking for another marathon. They had also struggled accepting their Austin marathon performance and were also people who have given me rides quite often. They encouraged me to come and I said I’m in 5k mode now and I’m not going unless they let me do it with a stroller… I emailed the director who initially let me know they just couldn’t do that despite my stroller division win, my 30k and half marathon age group wins. She even asked give me a reason why I should let you do it and not let anyone else not use a stroller… I said I didn’t know what to say to that and that I could handle rejection, since they were the 4th marathon I’d asked (Boston included). She said she’d sleep on it and was kind enough to decide she’d let me do it the next morning.

The rest of the story is what I would call improvised redemption. I am a guy who doesn’t know how to run without music but since I signed up with very little time I didn’t work on a playlist just though I’d add a few kids songs to the one I’d never heard in Austin. Then on the drive there as I started listening to it, I realized a song that has a few less than kid friendly songs (Eminem’s Till I Collapse for Example) probably should not be playing those since they were going to be on speaker while a 6 year old was listening in. So I removed those and forgot they took up a chunk of the extra time I'd allotted (I had a 3:30 playlist) and would not realize until the race that I'd cut it to 3:11.

Then I got to the race beginning and the front tire of the stroller I borrow for races was flat. We tried to fix it but a cracked stem isn’t fixable. I let the race director I was going to have to bow out. He said one of the volunteers would watch Kiana and I could still run it. I stated I appreciated it but I’d rather be the one watching her cheering on my friends than having her babysat. One of the guys who would be a volunteer bike rider doubled up a tube in there and pumped it… it was wibbly wobbly… and we tried it with Kiana and it was going to have to just take a lot of effort to keep it straight but it would have to do. I found someone else with the exact same stroller and asked if he would let us change the front wheels for the race and trade back after (he was not running with a stroller). He politely said no because he was just doing the 5k and then had a 90 minute drive to get home. Then it was my time to get on stage to address the crowd, as they had asked me. I had prepared a few thoughts but I had intended to arrive at the race looking for body glide, got distracted by the stroller issues and I managed to remember to start by first apologizing for the length of my short. Then I said I ran track elementary through high school, cross country in college, once ran a 1000 consecutive days and while I had never run a marathon till 3 years ago and am now at 7, it wasn’t until I got cancer that I started sharing it with Kiana. I shared the joke from my doctors that they can’t say my mind is stable due to my running habits but at least the MRI was. No one’s brain had to be as screwed up as mine about running it with a stroller but there at the gusher marathon, I encouraged them to make sure that any friend, family, significant other should know at the end of the race that the Gusher marathon helped you gush about them. 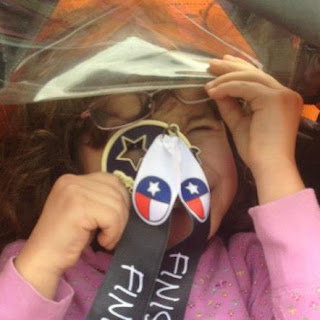 Then I got off the stage and put Kiana in the stroller thoroughly intimidated by this front wheel and that same stranger would come up and say, you know what, let’s trade wheels. I changed them as quickly as I could, asked him to please get my contact info and I could send him whatever after. I got them done with 3 minutes to race time and then got to the front to start the race. And we were off.

I was not quite mentally prepared for race conditions or at the race start. There were supposed to be 11 mile an hour winds and at most and they were more like 20 mile an hour winds with the wind getting stronger throughout the race with gusts up to 24 miles an hour. I am not great at tying my shoes and usually double or triple knot them before races. With the wheel distraction I didn't do that and literally had to stop to tie the first show about mile 3 and the second one about mile 8 (the first one got double knotted the second one triple knotted). These were also new shoes since I’d retired the other ones after Austin.  This race had a lot of turns which without a stroller I would have not noticed throughout a campus and downtown. With a stroller, you notice them because you can’t make that many hairpin turns (my garmin bonus for this race would be greater than any other marathon). The wind was so bad that since it was a two loop course the half marathoners who were running about my pace tucked in behind me for several miles and when they passed me on mile 12 thanked me for blocking the wind for them…

After crossing the halfway mark at just under 1:31, I couldn’t see anyone ahead of me and asked a cyclist how far back I was. She said there’s no one ahead which floored me. Was there a possibility that I could win not a division, not an age group but a marathon with my inspiration directly in front of me? Right about that time, the speaker started playing “It’s the time of your life so live it well” from A Bugs life and Kiana who had slept a good chunk of the first half… woke up and started singing it.

Then it was just trying to keep the engine going in the wind which kept getting stronger but if nothing else at least kept you from feeling as hot. When I’d passed all the water stops on the first go around, I’d asked them to splash me the second time around which people had fun with. I’d forgotten to point out that I’d be good if one of them gave me water every once in a while. Fortunately, the lead cyclist that was accompanying noticed me and brought me a few cups for the second half. The marathon had gels, bananas and all kinds of things along the course. I don’t use those but he managed to bike close enough to get them to Kiana which made her experience better and more fun. 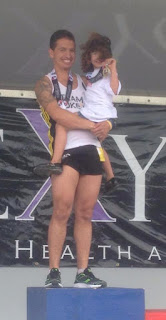 At mile 19, I realized each step now was one step longer than I had ever done with Kiana. Simply put, it was also something I would have never imagined doing, running a  marathon with a stroller. And so we kept running. On the second half, Bon Jovi’s, it’s my life came on. At that point 3 people were biking next to me and Kiana asked why are they hanging out with us and why is everyone waving at us. I kept having to barrel down because of the wind and so I just told her to be polite and wave and say hi to anyone saying hi to her. One of the people on the bike, I would later realize was taking video of it. And if you listen to that, (http://www.youtube.com/watch?v=iKLXEAPjwAw&feature=youtu.be) you’ll realize why I don’t do karaoke. But either way, on that windy closed six lane highway, I sang along answering the question I get asked a lot, why I’d rather run with a stroller rather than without one “This ain’t a song for the broken hearted, I ain’t going to just be a face in the crowd, you’re going to hear my voice when I shout it out loud” and “My heart is like an open highway, like Frankie said, I did it my way” “it’s now or never, ain’t going to live forever I just wanna live live while I’m alive.”

I’d gotten splashed enough to where my speaker that I run with a stroller stopped working and as I tried to fix it it went into a gutter. The cyclists said they could entertain Kiana and so I put on earphones for the last bit. Those last few miles were on that uplifted highway with the wind and temperature up. I’ve never gotten anywhere near a negative split in a marathon but this 1:31, 3:07 was the closest I’d ever come. When I push a stroller I sometimes push it ahead of me when I need to blow my nose or take some shot blocks in but when I did that, it literally would come back to me because it was literally uphill and against the wind. 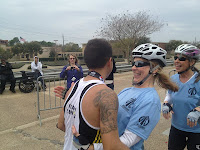 In the end none of us who went out there from Austin, had come in the time goals we’d hoped for. But a friend had pointed out to us that you have to focus on the process as much as the outcome and I think that's an important mantra. I handed out Livestrong bracelets to remind people of that. Still, three of the four of us made the awards stage for prizes. 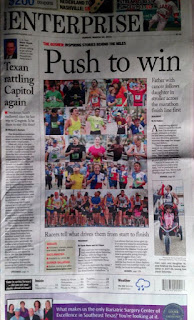 But here sore, reflecting and grateful, I still can’t believe that I won a marathon. Well, I came in second behind Kiana. at the awards ceremony, I immediately placed it on her neck and like every other race she’s been part of it that medal hangs in her room. It got some local press coverage if you want to read the story better written and more succinctly (http://www.beaumontenterprise.com/news/article/Brain-cancer-patient-wins-Gusher-Marathon-4342280.php). Either way, this marathon over 2 years later is literally 1 second apart from the one I’d put off brain surgery for. Turns out that maybe brain cancer, which has come with some nightmare scenarios, also has had some that are better than I could have ever dreamed. But at the Gusher marathon, against the wind and up hill , with my princess and inspiration a step ahead of me, I ran on a highway even if I’m not allowed to drive on it. I may never get to live down having put off that surgery for that marathon, I dare to dream that I lived up to it.

Update: If you've read this far read the race director's comment below and then showing how generous she is she also set up a scholarship fund for Kiana: http://www.donationto.com/Sports-Society-Fund-for-Iram-Leon
Posted by iramjleon at 3:26 PM