We uphold hero mythologies… perhaps there are people who really are heroes like I’ve been called that a few times over the last few weeks… and all I have to say about that is that if exercising with your kid makes you a hero… we need to raise the bar, I believe that should be the standard. There’s been different articles and there’s still more interviews coming and a cursory reading of this blog shows you that I’m both open (some have called it sharing a journey, others have called it narcissistic) but I like the tone of this one…
http://www.nj.com/ledger-dalessandro/index.ssf/2013/03/marathoner_with_brain_cancer_inspires_wins.html because it reminds me of one of the oddest and best things anyone has ever said to me… You’re somewhere between the perfect combination of Jerry Springer and Ellen. Somehow neither has called for an interview… There actually have been a couple of TV things and radio things and most of those aren’t shared on here because I am more self conscious about the interaction than the written word maybe because my own voice sounds odd to me and on video I see the muscle damage where half of my mouth doesn’t move as evenly on the surgery side. 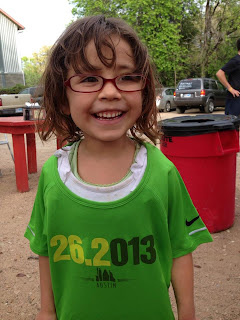 I am not a guy who gets stuck on details but in most of the press stories there has been various details wrong like that I don’t do races without Kiana (I don’t on weekends I have her) or that I didn’t start running until the cancer diagnosis. Some I imagine is me/someone communicating poorly and some is that we all like a good story. Let me dispel the idea that I’ve never thought quitting, I have. It was good people who helped me, who  helped me with self doubt or who reminded me that no matter how I ran it was being a good dad that mattered (and I am ever grateful that the two combined so well recently). But all of this reminds me of the Simon and Garfunkle song

In the clearing stands a boxer
And a fighter by his trade
And he carries the reminders
Of ev'ry glove that layed him down
Or cut him till he cried out
In his anger and his shame
"I am leaving, I am leaving"
But the fighter still remains

I’ve got some boxer and fighter in me but still some thoughts of quitting came. A couple of years ago, I fell apart. I am a disciplined person but I collapsed and while my cancer/divorce/job  was happening one of my friends said look you need to get laid, you need to get high, you need to get drunk, you need to smoke a cigarette, you need to get back to running, you need to get back to church, you need counseling. I had about as many cures to being down as I’ve had offers for cures to cancer. And on both counts, I’ve probably  tried more than my mother would be proud of. But if the Gusher marathon is a high point, if somehow I’ve written a line of my obituary that I won a marathon pushing a stroller, there was also a night where I got wasted on tequila and smoked cigarettes for the first and only time in my life. I woke up the next morning and then I got back to trying to run… if death was going to come, I was going to make him work for it and someone sent me a jersey that captures that perfectly. 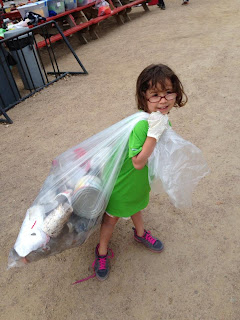 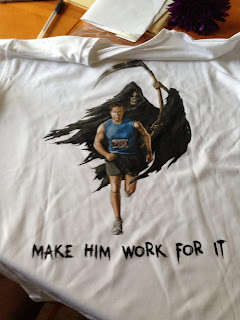 Because it’s where I let some things out of the box and some of the fighter that remains comes out. But that’s not the only way I’m a boxer. I keep a box that I’ve been making for Kiana since this all started. It sitswith pictures of her mother and I from the high school days, letters from the entire relationship, pictures of her with us. If the time comes, I hope someone prints out this blog and puts it in there. But lately there’s been these articles getting in there and I’ve asked those who write it to sign them so I can put them in there. I hope that I’m leaving some good memories for her in every way I have imagined how to. And even with the low statistics of survival, my sweetest dream is that when there’s the right point of maturity, I’ll be the one handing it to her.

I did a 5k today… came in second without a stroller… the thing about winning a marathon with a stroller is that from point onwards whatever time you get people ask well did you do it with a stroller ;). I am going to keep running and keep training hard and keep pushing a stroller but the point isn’t the win. It’s the effort. If death is going to win, it’s going to have to run pretty fucking hard after me. The only way I’m ever slowing down is to hold hands with a princess. We did the Austin marathon’s trash run. We just signed up for her first road mile race the weekend after I get back from Duke. And seeing her smile in those are million dollar memories.

I am going to try to stay ahead of my problems and besides my princess. Someone sent me a great bracelet that says Carry On and it’s super nice so I’ll probably save it for special occasions… There have been lots of people still offering cures to cancer, some with less than legal substances. I’m not going to risk custody or take trips all over the world to try to buy more time because who knows if it’ll work but I know I enjoy the moments now. Still, I trust my doctors and I think between that and me running is why the fighter still remains. But I’m going to keep boxing down cancer and boxing up good memories. 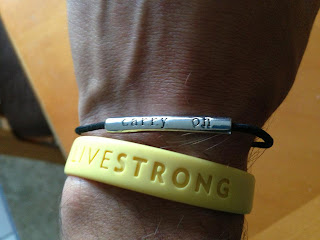 Posted by iramjleon at 5:09 PM