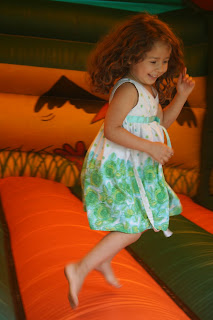 My friend Megan recently looking at my Ipod went to the top 25 most played list and it showed one more of my coping mechanisms (and the fact that this is the first time I’ve blogged 4 times in 4 days should show you another one). The truth is that I’ve downloaded more music in the last year than the previous 5 years combined. The top 25 showed that I was clearly heartbroken and trying to find a way to stay positive at the same time. Appropriately enough one of them was Caedmon’s Call Mistake of My Life which has the lyrics:

I'm in love, never been so sure of anything
Then again, could be a tumor in my brain
Tricking me into thinking that we were meant to be
Either way, I'm about to shock my family
And my hometown again
'Cause this time I'm leaving

Kiana's mom and I watched Caedmon’s Call live and I used to listen to that song before we were married and I listened to it as we were splitting up. Life can be odd.

The MRI results came in… sort of. There appears to be no shift between December’s and this one and they are getting a second opinion hoping that there was no shift between November and January’s and that this was a false positive (in my book I’d call it a false negative). There are days where I wish I had a more normal brain tumor with cleaner boundaries…as I write that I wonder why I am not writing there are days where I wish I didn’t have a brain tumor.

My neuropsychologist appointments are still coming in early February. These will demonstrate whether or not I’ve lost any functions since the surgery, another way they measure growth since this can have tentacles invisible to modern imagery. But my dentist would tell you that I definitely have at least more anxiety this time around. At my last dental appointment, it was an amusing moment when the aide asked if I had any major medical changes since I last saw them (it had been over a year, somehow I missed the 6 month checkup) and when I answered brain surgery, she looked up and down several times wondering if I was being serious. The appointment followed up with that my back teeth are being ground down and are flatter than they used to be and they wonder if I’m grinding them in my sleep (or lack thereof).

I filed my taxes, the most complicated they’ve ever been (and something I prepared in order to be able to to deal with a silent house while waiting for the next MIR), and had to answer the question about whether or not I’d had major life changes like getting married or divorced in the last year. Then using turbotax as I have for years it compares last year’s income and deductions to this year and it was uncomfortable at best to see the reduced income, the reduce donations to charity, the increased medical bills. Let’s just say that the medical bills paid which were over 15K paid last year exceeded the 7.5% minimum required for a tax write off. With that and my government salary, I will be getting the largest refund I’ve ever gotten from the government. I’m putting most of it away for a rainy (is it too cheesy to say brainy) day but decided to buy something for myself for the first time in over a year; a new TV since mine was like 7 years old and doesn’t even get signals anymore. And Kiana may be getting a few things for her birthday party that wouldn’t have come without Uncle Sam.

The “rehab tool” that my neuropsychologist recommended was lumosity.com which has apps for both the Iphone and the Ipad. They have a contest going of why you play and I explained it to them which they shared on their facebook wall event and it was the most liked thing they’ve ever put up. At the writing of this, I’m 5th in the voting out of 6000 entries, both of these simple things remind me that I have plenty to be thankful for. They even used my story on a promotional email. A counselor for Livestrong today asked if they could use part of my story on some of their promotional stuff. Coincidentally, it’s on the same day that I’ve got training for their marathon and that I’ve started putting together a tournament that will raise money for the Livestrong Organization.

MRI results, playlists, dentist appointments, rehab contests, tournament organizing, taxes all have forced me to look at the changes that have come and that are now a permanent part of my identity, some with me having such little choice. Still Kiana and I went shopping for her birthday party last night where she got some Little Mermaid napkins and a Little Mermaid bouncy house. Who knows if there will be other scares if/when this one ends but I’m going to have ups and downs. There may be some medical ones, some financial ones, some emotional ones but the best ones are going to be jumping with my little girl.
Posted by Mexican Vanilla at 12:44 PM