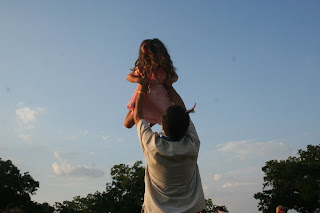 I am sure it’s a surprise to anyone who reads this but I write things down every once in a while. I’ve kept a little journal of stuff Kiana has said since she started talking and as I worked on some things for her 5th birthday party, I came across one of the first things I ever wrote down. A few years ago, when taking her to her first movie, long before any of this was on the horizon, we were walking out of the theater. There was a bug on the ground and I told her not to step on it. While she avoided it, she said “It doesn’t matter because it’s dead.” I responded that it was just sitting there but she kept insisting it was dead so I asked her what it meant to dead and she responded “Dead is when you don’t move; that’s why I never don’t move.”

Call it parental bias but I thought that was genius. As I sit here nervous about tonight’s MRI, I’ve been trying to approach it with that attitude. Kiana was with her mom this weekend so I got the things done that I needed to get done around the house and then ran my 15 miles with my running group (this proved why we’re called the ship of fools because multiple people said we ’only’ have to run 15 miles), then had breakfast with them, then played some ultimate with the Riverside Crew, cleaned up the house some and then had a bunch of people over for poker. Sunday morning I rearranged the furniture to open up the room more and then went and played winter league ultimate and then went salsa dancing with some friends.

It was good to have Kiana back, the longest I’d been away from her though because of the Christmas Break arrangement having a weird overlap with the first weekend of the month arrangement , it was 9 days off 2 days on 2 days off so trying to maximize the short time I had with her in 13 days, I took her for lunch that day, ice cream that night and breakfast that morning. The ultimate organization had given me a $50 gift card to Kerbey Lane as a thank you card and joked about using it to take someone on a date so I did and described it in one of my most popular facebook status: "Magical date later today with an absolutely gorgeous girl. She will turn heads everywhere we go. Then we'll head back to my place for dinner and she's even spending the night! I'm such a lucky guy. Couldn't be more smitten with this one. In the morning I'll make her breakfast. After we open her 5th birthday presents."

I’d long make the remark that no one says on their deathbed… and followed it up with something that I was trying to talk friends into or out of doing. No one ever says on their deathbed I wish I’d spent more time sitting around or I wish I’d spent less time with my kids. (The second reason is a huge part of the reason I tried to avoid divorce as I sat and listened to Elvis' My Boy, go listen to it if you haven't) So I don’t know when the deathbed is coming and they make me sit still through that MRI but let’s be clear other than, well I never don’t move. Let’s see if I can keep up with the brilliant girl Kiana who implanted that philosophy.
Posted by Mexican Vanilla at 6:19 AM