It's the Little Things 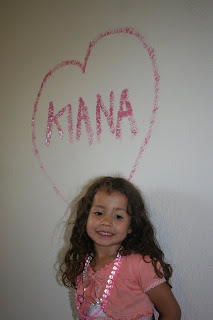 There’s an old phrase that if we forget the little things, it’s how we screw up the big things… So every once in a while I try to focus on those (skip this entire entry if you think little things are minutia). So far they’ve been going okay. My marathon training for the first time ever has no injury problems for the Austin marathon now only 3 weeks away… Amazingly, I found my original Livestrong Bracelet in the laundry and put it back on immediately which made me glow (not radioactively though)… the last MRI was not that great but not that bad. There has been some shift but its even possible that it may have gotten smaller but we’re following up with another one in 6weeks instead of 12 but the little thing there is that I don’t have to start radiation (hopefully ever) but at least not for another 6 weeks. Kiana and I made a tiny little lion that someone gave her as an arts and crafts gift at her birthday. I found a roommate, my cousin, who won’t be paying much rent (this is the cousin they named a team after in the tournament to raise money for my medical bill) but is as girly as they come and Kiana adores her. At my last neurological appointment, my doctor waived the fee and had it as an informal visit so that he could sit with one of his students and talk about this rumor tumor and this surgery that went with so few side effects (I came to find out in that session that the particular part of the brain I have problems is part of what is called the eloquent brain). He also let me know that he likely will not be my doctor down the road because for the first time ever Austin has hired a neurooncologist so two of my doctors will combine into one. They are building an MRI like the ones they have at Duke by September of this year right here in my hometown and while it will only be used by special patients… well I’ll be one of them.

There are some medium things on the horizon as well. My medical bills scare me far less than they did when this was diagnosed and my insurance has gotten pretty reasonable about working with me. One example of this is on things like one of the doctors that is no longer covered gets to work with me just for continuity of care. I am no longer worried about last year’s bills thanks to the kindness of a great variety of things from using up savings, to friends raising money to things like my doctor waiving this last fee so he could teach his sudents. I just signed a waiver to help promote some Livestrong stuff. They are going to catch one of me running which reminds me that I got bib #8 for the Austin marathon and Lance Armstrong got bib#7… I joked on facebook that I would definitely not be right behind him and my friend Chad commented that it was because of the extra testicle weighing me down… I hope we always make fun of cancer in one way or another but he’ll be beating me from being a better athlete. I’ve only met the man once briefly but I saw an interview with him recently where he said that he hopes to be remembered as a good father… me too. I’ve also had some friends who have told me that Livestrong got criticized for not donating to cancer research but while personally I’ve raised money for both Brain Cancer research and for Livestrong, I think at the end of the day we need both types of organization. We need help with curing/managing it but since we’re not curing it tomorrow, those of us living with it or dying from it need some help navigating the course. We invented maps long before we invented bicycles or cars or rockets.

Anyway, I may be starting radiation in 6 weeks, I might not. The neuropsychologist may say I’ve lost some functions; he might not. But I’m here today and there’s a lot of good little things, the best one being a little girl. A lot of gray in my gray areas… but at least that bond is still in black and white.
Posted by Mexican Vanilla at 10:13 AM