The 3rd Brainpower 5k was today. The first year it was the first race that made me think it wasn't time to hang up the cleats. Somehow in Austin's first ever brain cancer research race a few months after all my story with brain cancer had started in 2011, I managed to win it and more importantly had enough friends to be the lead fundraiser but only took one friend with me.... The second year I got lost in the course and got second in my age group and second in fundraising. More importantly, it was the very first race Kiana, my mother and I all did together which kept me focusing on the best part of life part II, that life is better shared. We had several friends who came out and did it... 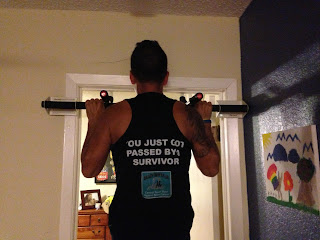 Then this year, I was one of two honorary co-chairs and with the help of some of those beautiful people, we created what will help the guy withe memory problems remember this as one of my favorite races ever. One of my shipmates send out the invite to the group two years ago. This year lots of them came up for it. I got up worried how well I could hold this since it was one week after a marathon and the legs were nowhere near back but even as I was getting dressed, I realized that this year, my team had almost 60 people on Team Scarecrow (if I only had a brain), people had been kind enough to contribute to where people had donated 150% of what they had two years ago (over $2400)  and totally my team had raised even more (over $4300)! I did a few pull ups to remember before I'd even walked out the door to get a ride from one of the shipmates that we had bigger wins before the race had even started.

And so we went to race... and there I saw some people that I've met through this journey, some much wiser, some much younger, some more, some less scared, some who are commemorating people who have not survived this disease. I met some new ones, one who had literally finished chemo two days before today's race.  We had the survivors walk through the crowd and both gratefulness for still being standing and some level of guilt were the emotions before the race kicked off. 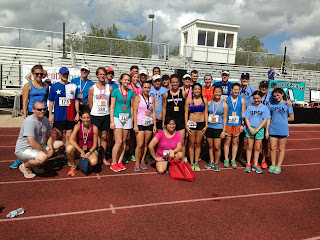 I struggled with the playlist for this race... As with all races, I was going to gun it since that's all I seem to know how to do but didn't know how well the legs would hold since I hadn't been in 5k training mode and I'd ran a marathon this week. So I got home on a stormy night where when I'd headed out, I'd seen a rainbow. And I remembered the simple reality that every race I've managed to keep my gut together and not vomit was one where it had been overcast and/or rainy. The half marathon that got me bib 911 was a rainy one, the marathon I'd put off brain surgery one was an overcast one. The races I've thrown up on are the ones which there wasn't a cloud in the sky. Cloudy days aren't always the best in life for many reasons but they are the only ones in which rainbows happen. And even on the days with storm, somehow nature has conceived of that rainbow which splits up light and makes us just wonder at the beauty that can exist in thunder and fear. And so Kiana was with her mom this weekend so I called her the day before and started the race with a song her and I sometimes listen to on stormy rainy days:

Why are there so many songs about rainbows and what's on the other side?
Rainbows are visions, but only illusions, and rainbows have nothing to hide. 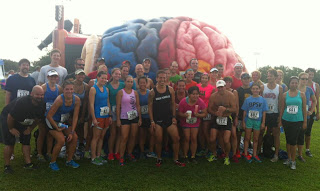 The three of us in the lead were together till mile 2. In the end the guys who would end up in 1st and 2nd had more kick then me and I came in 3rd over all in  18:18. This was first in my age group and while it wasn't my personal best, I realized that even exhausted and one week after a marathon, I had come in a faster time than I had 2 years before so it was my best time ever in the brainpower 5k. And embarrassed about the fact that last year upong being frustrated at being lost I'd walked away and not paid attention to teammates (which almost happened this year) I immediately turned around and cheered my teammates on one by one. 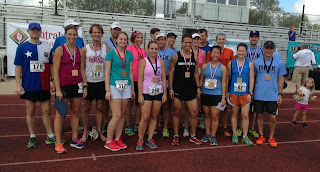 Last year we ran and then kind of all went home. This year we had a potluck at a friend's pool where we hung out most of the afternoon. This year we stayed and realized we had won and/or place in a huge percentage of the age groups, genders, divisions. We were the 3rd largest team, the 3rd best fundraising team in a race where I came in 3rd place and 3rd fundraiser on the races 3rd year. Jerry Seinfield makes a joke that he'd rather be the bronze medalist because then at least he placed rather try to have to explain why he didn't win. I don't know that I'd go that far but I'd rather come in 3rd with faster times 2 years later than come in first with slower times. I'd rather come in 3rd with more money raised than winning fundraising with less money raised personally or totally (the race as of today raised almost 78K).

There are days I recognize that in some financial, emotional aspects brain cancer has made some of my life worse. But today wasn't one of them. Do I think 78 thousand dollars will cure brain cancer? Probably not but I hope and dream that it's a powerful seed or tool along the way. There were some sweet couples on my teams, a couple of people who got their first 5k in, some people who dreamed and achieved their best time.
So with every ounce of me that matters, I am pleased this brainpower 5k means more to me than the first one I won two years ago. That win helped me focus on that while you better believe I'll keep pursuing them there are far bigger than things than first place medals. And while, I'm not sure we'll ever catch a rainbow of the cure to brain cancer or a perfect race or perfection connections sometimes for me it has been a colorful beauty in the storms of brain cancer or the breathing in hard races that makes me think that in my clouds of doubt

Someday we'll find it, the rainbow connection, the lovers, the dreamers and me.

Posted by iramjleon at 4:44 PM