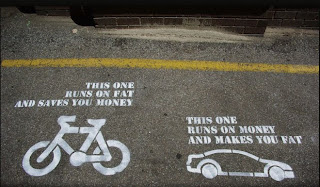 I have read both of Lance Armstrong’s Books, It’s Not About the Bike and Every Second Counts. They are both good reads and the second was actually given to me by a coworker, an autographed copy. Now that I’m learning a little more about cycling a couple of non cyclist have teased about the fact that It’s Not About the Bike has a whole lot of information about his bike. Well let me say that as I learn a few ounces of the tonnage of material to learn about light weight bicycles… he could’ve put in a lot more info. Anyway, I have started cycling now regularly and this week for the first time in my life, between running and cycling I covered more miles exercising than I did driving. After all, if you don’t watch your figure no one else will.

I’m a decent runner but it’s definitely different muscles from cycling (though Kiana points out when she rides her bike that neither of them make her as tired or as sweaty as they make me). I’ve gone on two group rides, one was 35 miles (I rode to and from and made it 47) and one was 30 with guys from Mellow Johnny’s whose easy ride I had a hard time keeping up with. I am not sure what’s considered a short or a long ride since even my short ride are longer than my long runs. I still haven’t been able to learn to “draft” cause I’m just afraid to be that close, mostly from lack of confidence at this point. Chris Brewer from Livestrong has taught me some stuff but he’s also told me some things about the cycling community which are all turning out incredibly accurate. They have some great jerseys, some serious looking and some more fun looking. He has a great Scottish looking one, I met a guy from my home state who had a great Mexican looking one, and today on my workout I passed a heavy set guy who was wearing a Michelin tire one who said he wears “so it’s obvious that I like my extra tires”. Cyclists apparently are more prone to tattoos so the one change I decided to do after the surgery, get a tattoo after the follow up apparently prepared me but I need to get some more (just kidding mom). There is a lot more intelligence required than running. How you’re supposed to properly pedal is more learned. Shifting gears is interesting  and apparently I had shifted into the wrong gear between the two front ones and was doing something nicknamed stomping grapes using my running muscles instead of the correct ones. I should instead be focusing on RPM’s (which after pretending like I knew what it was for a few moments was finally told it’s repetitions per minutes). Speed work outs are more fun and also more frightening because I am moving at my fastest twice as fast I run and at my slowest, faster than I run. I have heard both about how Austin is great for cycling and then hear about how a guy just got killed on a common route.  I am using my garmin running watch but have now learned to compute it into minutes per mile because I did a 3:12 mile sounds dorky to true cyclists. But again, the kindness of humanity and of networks continue to amaze me. The first time Chris took me cycling he said that cyclists always watch out for each other and if they see one they offer help. I’d never needed help before today and when riding with others I’ve seen them offer (I’ve yet to do have the opportunity it but am nervous because I’m not sure what a guy this ignorant will be able to offer).

But tonight, I had another commitment so I didn’t have enough daylight to spare to ride the 50 miles I’d planned so I just wanted to get as much as I could of cycling and as is my style pushed sunset while doing as many loops on something called the Velloway, a 5k loop in Austin only open to wheels. I talked to a couple of guys and did a lap with them and they were guys who had cycled for a while and were surprised I’d only been doing it a couple of weeks. Like every other cyclist who has looked at the Trek bike Mellow Johnny’s lent me, they were impressed and commented on how it’s from this series with these type of tubes and wheels and I just smile and nod. Then on the 3 miles home, I got my first flat tire. I had gotten the tire off and was putting the other one but only a moment later, the guys I’d met tonight and done less than 3 miles with stopped and helped me and then I got back home no worse for the wear. We traded stories and it turned out that he had a family member die of brain cancer and we talked about Livestrong and their events. We traded numbers and hope to do some cycling together while I still have this bike. But again, someone who an hour before had been a complete stranger stopped to make sure I was going to fix a bike and get home okay (lots of other cars passed by). Anyone who doubts humanity or community can’t possibly be part of one like the cycling, running, church, ultimate, neighborhood or family ones that I’ve gotten to be part of. I’ve been amused as I learn some of the cycling information at the phrase, “It’s like riding a bicycle” because doing it decently is not exactly something I can forget because I never knew it. In a few weeks, I’ll ride the century I hope and the bike will go back to its owner but I hope being part of communities is definitely something I never forget how to do.
Posted by iramjleon at 7:47 PM