There is the old phrase that one man’s garbage is another man’s treasure. There have been times through this process whether I’ve wondered whether I’m the garbage or the treasure stage of my life. That perhaps I used to be someone’s treasure and now I’m just someone being discarded. I try to fight feeling beaten and I win most of the days, most of the time but not all the time. There are times where I wonder what I heard in a song about yesterday’s men

They took the best years of our live and made us yesterday’s men.

And wondered if I’m one of those guys… where my best days are behind me. I sure hope not. I am going to propose something reconciliatory to the department where we have a nicer break up and if we get nowhere I’m fighting back if for no other reason than financial. I’m not broke as such right now. I got the biggest tax refund of my life back in January due to keeping the house, the kid and the medical bills and put away the $4000, I’ll get about 5 weeks’ worth of pay so I won’t be panicking for a little bit… but oddly enough much faster than I would have at any other time in my life. I tried to talk to Kiana about having to move and perhaps showing she’s as tired of the upheavals as I am she simply said, well we can go somewhere as long as it’s almost exactly the same as our house. So the way my “retirement system” plan works I’ve come to learn in the last 24 hours is that there’s been 7.5 percent taken out of my paycheck without a choice forever. I am not vested because I wasn’t there 8 years but the vesting doesn’t matter unless you retire from there, leave it there till age 60 or unless you die and at that point is when the county matches it. The interesting thing is that if you die after having served 4 years, they’ll match it the same as if you were vested and pay a lifetime benefit to your beneficiary and they pay it out to them for the rest of their life with cost of living adjustments every so often. So if I were to die tomorrow, Kiana would receive $400 a month for as long as she lived. If I die when she’s older, it would raise proportionally to her age, not mine. I don’t know when I’ll die but somehow it’s ‘comforting’ to know I’ll be able to pay child support from the grave if push comes to shove. And because it will benefit her whenever I die, I will do everything I can for it to be hers and never tap it. It’ also “nice” to know that while pricey my long term care and life insurance are portable at a much cheaper rate than Cobra.

I am not going to continue with monitoring this damn tumor until or unless I ever get health insurance again where it’s reasonable. I won’t turn into cancer in order to keep track of it; I will not drain healthy resources for unhealthy ones. However, I will of course do the safe thing and continue to take my anti seizure medication forever. Let me diverge for a second and say I heard a story of someone whose husband passed away more quickly than expected and his wife had over 10,000 worth of chemotherapy pills. She would not throw them away and could not get any doctors to pass them on to another patient. Through a support group she joined, let’s just say she discarded those pills and one woman’s garbage was another man’s treasure. Keppra, the anti seizure medication I’m on has different side effects on different people and so they take it very briefly when that happens and move to another one. The first one I was on made me have such flat affect that I had to do my personality from memory. Another patient on Keppra with side effects she didn’t want… I am taking out her garbage for her and it will let me treasure the next 3 months without a visit to the pharmacy. 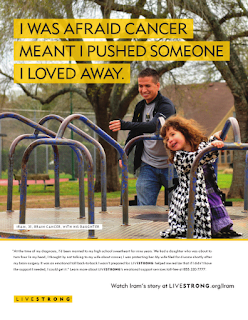 The first of the Livestrong ad’s came out and is here visible. The juxtaposition of the quote and the picture are tough to see but that’s my treasure. And anybody who would discard a moment of time with that girl is garbage in my book and I don’t want to be garbage anymore than I want to be cancer.
I am still training, did my first track meet today since high school, since 1997. I used to break a 5 minute mile than and today I did 5:08 mile and a 2:25 800 and they hurt. Going hard hurts, pushing yourself hurts. There’s a few more and I’m going to do as many as I can and see if I can’t break 5 this summer again in preparation for the Brain Power 5k. People ask why I don’t stop exercising instead of other things…That is such an odd question to me. I went to Livestrong’s Cancer and Emotions class and it was actually one taught by the same person that did their cancer and relationships class. It was somehow comforting to say I looked like I’d made so much progress. It was a forum so there was a lot of talking and suggestions. People were suggesting this breathing technique, mediation, talking, music etc and I’ve used plenty of those but my suggestion was no matter which one of those you do, make sure you exercise. Whatever else cancer is, it’s also a physical thing. Emotions are attached to the body; whatever else we are, as mental as we are, we are also physical beings. I was amused when one of their staff came up and thanked me for coming and I smiled and said, “guys, I didn’t come here for you; I’m fairly sure you made a video about how I sucked at this.” They smiled back.

My friend at the hospital is doing way better. It was a dramatic difference and I wonder how much perception he has of it. People would always say that shortly after the surgery when I felt okay I looked and sounded horrible but in time it would make a dramatic difference. His wife was there today and I joked with him that he was looking so much better from day to day he’d be Brad Pitt in no time. I was incredibly touched and jealous when she said, “he’s already better looking that Brad Pitt.”

I’ve been discarded by a person and a place that I really really loved. Some of that was definitely of my own fault and I’m down in the dumps. I hope someone, some place will find something to treasure in me.
Posted by iramjleon at 6:53 PM