There are only two types of people who people who are successful and/or make a difference in life. In extremely painted scenarios, there are those for whom the universe aligns, those whom were born into a life where their parents were able to provide many many things and they learned to run with it, they get a great start. There are those who the universe stacks up the odds; they are born into rough neighborhoods and have to challenge their environment to get anywhere and even then it seems like the hurdles just keep coming.

I grew up with a single mom in a neighborhood where people were killed. People keep asking me what I want to do in this transition and that’s a great question that I honestly had never given much time to. There is a psychological phenomenon that we believe things happen for a reason; something that in all frankness, it’s obvious I don’t believe. This comes from my psychological background which shows that if you present people with the exact same story and then give radically different endings with just a one sentence difference, most people will believe that what happened was what was supposed to happen despite the fact that you’ve given them opposite endings with the exact same beginnings. Someone recently recommended a book about someone who tried to write about the meaning of life while having lived through the holocaust. I appreciated the kindness but this isn’t some world event that I’m going through; I’m just a kid who got a rare cancer, lost his wife and lost his job and is raising a princess. I just don’t think my life is that important. I recognize my life as I knew it is shutting down or to quote Andrew Lloyd Weber’s Musical:

Close every door to me, Hide all the world from me Bar all the windows And shut out the light Do what you want with me, Hate me and laugh at me Darken my daytime And torture my night If my life were important I Would ask will I live or die

Now Joseph’s song ends happy because he remembers that he was promised a land of his own. No one owes me any promises or a land of my own.

Everything bad that has happened to me has been by random chance or ignoring the data. I got everywhere good I’ve been by 2 things: help and self determination, in that order. I trained for my first marathon and crashed ridiculously hard thinking I could do it by myself. The next several I got help and coaching on and each one was better. I honestly never intended to work where I gave 6.5 years of my life to. I went there to ask who they contracted out to and they encouraged me to apply; if that doesn’t teach me that I shouldn’t marry quickly I’m not sure what will. I am a guy who follows through on his commitments. Currently, logistically, there are 3 outstanding, the brain power 5k (for which I volunteered at a booth on Saturday), the running community (for which I’m helping coach a marathon training group) and the Livestrong Century ride for which I rode just under 60 miles yesterday. I am not Catholic but if I don’t find a way to make things work between now and then, I’d say having helped raise some money for both research and the organization that helped me connect and teaching some for their first marathon… I’ve at least, if nothing else, paid my penance. The ultimate community I love dearly and I ran tournaments long before this and have ran several since then but I have finished everything I committed to and let them know, that for an indefinite amount of time if not ever, I’m done. I’d go back in a heartbeat if it was possible but that, in these days, is looking less likely. I am exhausted and wondering if soon and very soon, this entire adventure will be a ride was improbable, at some level impressive but also its soon to be over.

I dare to dream that I’ll get the job at the American Cancer society and intend to call them tomorrow but there are a couple of other jobs coordinating events, something I’ve volunteered for since I was oh 8 years old and never done professionally that I’m also pursuing. Juvenile probation is a great job and they do great work but the last week has made me realize I’ve never really been their type of staff. There are exactly zero other people in the building there who do any serious athleticism. The guy who loved seeing the world and misses doing so was always intrigued by one phenoment; my boss had us bring back postcards from where we’d been on trips. I had more on the wall than the rest of the unit combined. It was a job where my boss actually discouraged me from working evenings or weekends and just stick to 8-5. The one other person who had ever ran a marathon turned out to have some talent and got close to Boston qualifying and never tried again, saying it was just too much work. (I am not saying there’s anything wrong with people with my coworkers lifestyles but there are companies where people match up far more than I ever). The kids we work with, in my opinion, are roughly in the place they are from poor parenting, poor background but most of them struggle because those years of patterns aren’t going to change overnight. Teaching self determination aimed in the right direction is hard but the kids we succeed with are those we pull that off.

The first marathon I ever did was not actually a marathon, it was a marathon relay where the 5 of us together pulled off a Boston Qualifying time. I don’t know where I’ll end up or if I’ll need to settle on something that just pays the bill. But I want a job where self determination and teamwork are the norm, where we’re trying to improve things and do so together. I know that may be over dreaming but as it says on my daughter’s wall, “Shoot for the moon and you might land among the stars.” 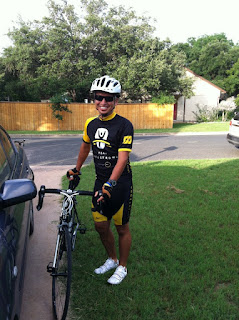 In regards to my wife, I wish I’d done a better job of handling her emotions. I intended to die holding her hand and well, I am sorry she and I both mishandled somethings and that there’s a princess who pays the price for it more than anyone. In regard to my health, there’s nothing I could have done. In regards to my job, I am not sure I can say I regret not having been a lemming. I’ve sat and thought about it and while of course it’s been only 2 weeks, I can’t imagine taking it back just to be a lemming.

That of course is not to say I like being unemployed… But everything that was questionable when I was told I had cancer is not going to be part of the future… the job that stuck me in a back room with no communication, tried to prevent me from returning as soon as possible is now gone. We’re probably still having some aftershocks in the next few weeks but I’m not naïve enough to think it’d be healthy for us to go back to working with each other after all this.

I bought a house a month before Kiana was born and refinanced it to a 15 year loan long  before all this started so it would be paid off right around when she graduates high school so I could help her start college and/or adulthood okay. I took every anniversary off and traveled all over the world with someone who would leave anyway. I still never called in sick after having the seizure and would go to the doctor and back while having 108 medical appointments over the last 18 months. This may all still far apart in what feels not much longer than a heartbeat but I’ve started trying to network, updating my resume and willing to take help in connecting to a job.

I liked my life but am open to change now if by nothing else that it was forced on me. Yesterday, I biked up a hill that I would have ran up faster. While volunteering at the Brain Power5k booth, there was an acupuncture booth and the guy afraid of needles took a stab at it. Life Part II is full of novelties; man I hope good ones are coming.
Posted by iramjleon at 8:57 AM