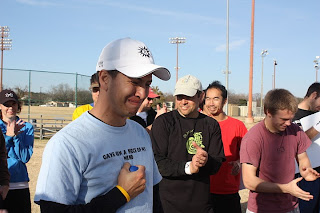 Let’s be clear; unlike most blogs I write, this one is being written while I cry. I didn’t go to Duke to beat cancer. I went to Duke to die. I didn’t expect to come out of there not breathing but they were going to screw with my brain and whatever, I might be, it was all contained in the brain. I said something over and over at those dinners, on facebook and in this blog that people took the dreamers side of but I was also definitely thinking of the scared side “I don’t know if the guy going is the same one coming out but this one loves you guys.”

Today I had to hear of someone who I talked to that has stage II prostate cancer, a cancer with a high survival rate was told he now has only a few months left. For a guy who had no cancer related deaths in his circles I have had a few too many this year alone. Wonders and worries is using the blog entry about their ball but they’ve edited it and cleaned it up and it reads better. Hawktober used part of my story in their blog and switched up two of my doctors, not a huge mistake because both of their last names are Friedman. I obviously talked longer than the Livestrong video but there is a small misquote. I said  I learned to braid Kiana’s hair and I learned to brush Kiana’s hair. It’s brushing her hair that I do the best, I suck at braiding it though that video has made me work harder at it (the girls have told me that I’m the best at brushing because since I’ve never had to brush my own hair I probably do it softer). The blog written about me around last Christmas got my half marathon time wrong. The blog entry that I wrote about Boston is being edited to go to the Austin runners club newsletter. With each one, I’ve handed over editing power because the details aren’t all that significant in the scope of their stories. Each one is just a slice of life where getting stuck in the details is stupid. There are of course places where slices are more important.  Apparently the way my cancer surgery works is they take little small portions of the end and do immediate checks because they don’t want to take more than necessary because cells that close to the brain center are more critical. In other type of cancer surgeries, they take out all of the cancer and then extra in things like lung, testicular, colon and kidney cancer.

When I started writing this, Kiana's mom used to edit the entries because her major was in creative writing and while she mostly cleaned up the typos and grammar issues, she probably made some of the writing a better story. Shortly after she left when I started blogging again, she sent me an angry email about how I needed a new editor. This blog had its comments moderated because it was exhausting deleting hers, and if you read some of those other articles you may have noticed her comments on at least one, edited on another, and another organization that received a complaint about that you should worry about your poster children when only the nice parts end up on the poster.  I think the average friend and stranger would read that this blog is pretty damn raw but when Livestrong received a complaint after the video went up, they did a background check and while they discussed it, they said, much to their credit in my book, we work with all types of people here.

Several people who read this have suggested I make this into a book, most of those people would be people like my mom ;). Neither the writing nor the story is good enough but it was somehow nice to hear that even Armstrong’s book was co-written by someone else. We all need people who help us make sense of our own stories, focus on the right things. Some might say that this is fake but I’d say it’s about as fake as getting a hair cut or hair style, wearing clothes, or going to the doctor for that matter. Learning to mess with nature has made us better in some ways even if it isn’t completely raw.

But there has to be moments where you should be unprocessed, people who you can let your hair down with, people who give it to you straight. For me, my favorite doctor is my local neurologist Perurena because he hands me my medical file and says it’s your body, you have a right to the info. The neurologist I drew in the ER is what “inspired” me to go put together my own team of doctors because his receptionist was shocked when I wanted a copy of everything in my file. Look, I’m not a doctor but if my life is on the line I want as much information as I can have. To anyone who is sick of anything, I recommend not freezing or worrying as much about bedside manner as getting a doctor who can give it to you straight.

While in my opinion, it shouldn’t be your doctor because there you should be focused on the date, I am glad to have had some people there to collapse into. I made the mistake of trying to protect someone who in the end probably couldn’t handle it anyway but I am glad for the guy who is now the executor of my will, Todd. He was the one who I went out to eat with and had some damn cheesecake on the night I decided to have the surgery. And like a 15 year old girl, I sat and cried over cheesecake because I’d decided to let my brain get sliced open over something I couldn’t control and would have never imagined. Honestly, that was one of 3 times I cried from the diagnosis to the surgery. But I’m glad he was there and that he’s still here.

I looked at my calendar today and shy of a dental appointment (which these days I don’t even consider medical anymore), and for the first time in who knows how long I have no medical appointments in the entire month of May. That was ridiculously thrilling and a little lame to acknowledge that it was thrilling for a guy who used to never call in sick. I made the decision that there’s no excuse to retire from the Austin Livestrong marathon if I have medical clearance and will do it again next year if all the parts hold but early registration starts in June and I’ll be signing up the earliest I ever have.  I’ll find out a few days before about whether or not this most eligible bachelor thing is going to happen but either way, maybe just maybe it’s time to wonder if losing that George Clooney bet should be reconsidered (with that said, Chris Brewer, the guy helping me train for the bicycle ride told me go slow about being a multiple time offender).

Of course, I realize that there are places where you should only let certain things be said or done. Kiana gets in trouble for being inappropriate from me. I work in the court setting and in both the job and other places I have definitely stuck my foot in my mouth. But there are places where you have to be raw. To anyone who reads this blog, thank you for putting up with my rawness and at least tonight for letting me rant while tears flow down my cheeks.
Posted by iramjleon at 7:50 PM